This article is part of a year-long feature - watching and blogging about twenty acclaimed, cult, challenging and rare films over the course of 2013. The full list of films (and links to other completed posts) can be found here. Chapter eleven: traveling to Bora Bora and confronting a Tabu. 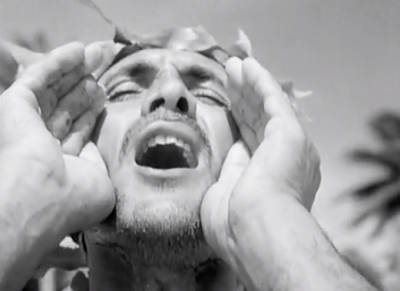 F.W. Murnau is perhaps the director responsible for making me take silent cinema seriously. I had seen a handful of 'classics' prior to sitting down and watching Sunrise: A Tale of Two Humans on a whim, but that was the film that truly illuminated the intoxicating depths to be found in early cinema. Far from being a chore or relics to be watched because we're supposed to, Sunrise proved to me how they can be giddily entertaining, ambitious, grand and offer completely unique aesthetic identities. The silent masters were perhaps more capable visual storytellers than 99% of living filmmakers, and time has diminished none of their achievements - in fact, the subsequent almost-century have only affirmed their successes with comparatively 'limited' technology. And F.W. Murnau - along with your Eisensteins, Langs, Dreyers - was one of the true pioneers.

Tabu marks Murnau's final gift to cinema before his untimely death in a car crash, mere days before the premiere of the film. It also marks an attempt by Murnau (one of early cinema's finest fiction directors) to collaborate with Robert Flaherty (one of early cinema's finest non-fiction directors). Given the fundamental differences in the ideologies and personalities of the two filmmakers, genuine co-operation proved nearly impossible - tales of which are fascinatingly recounted in the generous booklet included in Master of Cinema's gorgeous new Blu-Ray release of the film. There are elements of serious anthropology here, but it's clear Murnau took the reigns. But while the behind the scenes stuff makes for fascinating reading, the film itself offers no shortage of pleasures either.

Like most Murnau films, the story itself is easily digestible. A boy (played by Matahi) falls for a girl (Reri aka Anne Chevalier). It is decreed that the girl will be whisked away to become the 'sacred virgin' of the islands, and any man who looks upon her shall fall victim to a dreaded curse (the eponymous tabu). Boy cannot accept this, and runs away with girl. The two appear to find peace in a suitably distant fishing village, but they are haunted by the threat of the tabu. It is a straightforward tale, with all the emotional peaks one would expect. But the poetry is in the form.

There is a raw energy to the imagery and editing of a Murnau film that makes his work completely unique in the annals of film history. We see this time and time again throughout Tabu. Of course, he's gifted with a supremely talented cinematographer in the form of Lloyd Crosby, who himself is equally gifted with the vivid tropical sunlight that allows for true image clarity. Although his collaborators and setting all assist him along the way, the sheer auteristic flair of Murnau's film is near impossible to dispute. From the opening scenes featuring the beautiful, innocent rush of island life (allegedly the only scenes Flaherty had any meaningful participation in), it's a hypnotically single work of visual storytelling. Several sequences warrant being singled out, but particularly two mass boat journeys - one during the day, one at night. The first is breathtaking in its scale, with dozens of canoes taking to the sea to greet a nearby yacht. The second recycles the idea, but injects it with new life by having the spectacle take place by torchlight with more urgent drama.

It's perhaps the final boat journey, and the film's ending, that illustrates the film's storytelling at its purest. Throughout the film, the girl is haunted by her native island elder (Hitu), who is also cursed by the tabu if the 'virgin' isn't returned to her rightful throne. At times, it's unclear whether this is some sort of psychological manifestation of the girl's guilt or whether the mysterious elder is actually there himself - in fact, that ambiguity is what makes this strand of the tale so memorable. Nevertheless, she is ultimately whisked away by the elder at the film's climax in a boat, pursued by the boy (who has just broken another tabu - diving for pearls in forbidden, cursed water) when he realises what is happening. This is the stuff of high melodrama, no doubt about it. But how Murnau handles it is remarkable. He and Crosby keep the camera distant (very distant indeed in some shots), resisting the temptation to zoom in for cheap, exaggerated reaction shots. It's creates a haunting, desperate mood that amplifies the sequence's emotional range while remaining steadfastly brave and unique. When tragedy ultimately occurs and the boy drowns, exhausted and defeated, it's a heartbreaking moment: so much more so because of the completely confident framing and editing. The new transfer only helps emphasise and amplify such achievements.

While this was a silent production, unfashionably produced after the dawn of the talkie, it nonetheless does mark Murnau's most explicit experimentation with sound through Hugo Riesenfeld's deeply integrated soundtrack. It helps propel the narrative throughout, but it most strikingly accompanies an impromptu celebration that breaks out in the film's opening half-hour. It's a perfect symphony of sound and visuals, and a stunning realisation of the passion and enthusiasm the islanders are expressing at that moment. I can't help but wonder how Murnau might have experimented further with the possibilities of sound had he survived his forty-second year - certainly the later efforts of once silent pioneers like Carl T. Dreyer were valuable contributions to sound cinema.

The tragic aftermath aside, Tabu is a film alive with experimentation, including several early examples of underwater drama (the appearance of a shark does betray the primitive nature of the special effects at the time in an endearingly naff way). It's a work of startlingly clarity and passion. Tabu: A Tale of the South Seas is a cherry on top of Murnau's rich, enviable filmography: a truly exhilarating swansong.
Posted by thecynicalgamer at 2:24 PM