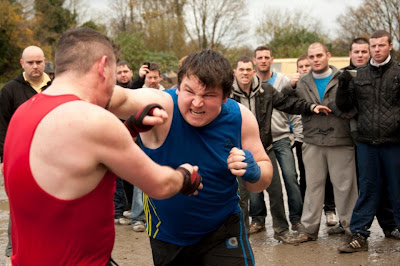 King of the Travellers is cinematic excrement – it’s best we get that statement out there right off the bat lest there be any confusion. This is not entirely surprising, given director Mark O’Connor’s previous film Between the Canals was every bit as objectionable. We should, within reason, never write off a director based on their first feature – we’d have missed many great masters if we did. Canals could well have been an aberration: its narrative clumsiness and directorial deficiencies at least partially attributable to major financial limitations and simple inexperience. King of the Travellers, being a sophomoric effort with altogether better resources, does not deserve such kind excuses, and merrily proves Canals inadequacy.

A stream of non-subtlety begins with the title – any inherent presumptions a name like King of the Travellers might suggest to you are likely to prove entirely accurate. A brief albeit theoretically pivotal flashback prologue aside, we open with what – two films in – has become a Mark O’Connor trademark: a lengthy credit sequence, set to jaunty Irish folk music and featuring black & white archive footage of the travelling community (Between the Canals featured random shots of Dublin instead). This may seem like a harmless enough opening, setting a historical scene, but actually it’s indicative of several of the film’s ultimately crippling flaws. It is pointless, overlong and conjures up a mood that has absolutely no bearing on the film ‘proper’. It is five minutes of filler in a film that already desperately struggles to justify its supposed feature length. Actually, in that sense, it sets the mood perfectly, if not in the intended manner.

The film is set in the travelling community of the Fingal area of Dublin. The Moorehouse and Power families are engaged in a long-running feud, one of the inciting incidences of which was the murder of Martin Moorehouse (David Murray). A decade or two later, Martin’s son John Paul (John Connors) is a bare-knuckle fighting champion who wants to protect his father’s legacy. His uncle Francis (Michael Collins) is trying to put an end to the feud, although unpredictable Mickey ‘The Bags’ Moorehouse (Love/Hate’s Peter Coonan) wants anything but. Matters are complicated as the Moorehouse and Power lands are separated by ‘settled’ land, and those owners aren’t too happy about the constant traffic through their fields.

The plot of King of the Travellers is built on rotten, clichéd foundations that collapse early on, the rest of the film desperately playing out in the ruins. It pretty much plays out exactly as you’d expect it to, albeit with a bafflingly illogical final ‘twist’ that rather incredibly only makes things worse. There’s probably around fifteen minutes of actual worthy narrative progression, and therefore even at a lean 70 minutes (precluding opening and closing credits) constantly struggles to find stuff to put on screen.

A bizarre, redundant fantasy sequence is one of the most obvious indicators of the film’s seemingly unstoppable stream of filler, but it’s the star-crossed love story between John Paul and childhood friend Winnie Power (Carla McGlynn) that really defines the film’s desperation. It aims for Romeo & Juliet, but ends up more like Gigli. Near the start, O’Connor even has the cheek to directly reference The Godfather. At its best, King of the Travellers merely reminds you of much better stories, the direct allusions an awkward act of further self-sabotage. It all leads to a supposedly tragic conclusion - John Paul's death as his true love looks on - that is so poorly staged the natural response is simple, innocent, pure laughter. The divide between melodrama and ridiculous is often wafer thin, and this film stumbles back and forth with hilarious frequency.

King of the Travellers isn’t populated by ‘characters’, such is the clunkiness of the exposition and dialogue. It’s a film instead occupied by strange apparitions who behave like they’re reading out chunks of a plot synopsis rather than interacting like believable human beings. Even then they’re contradictions, with protagonist John Paul being equal parts sensitive and psychotic, and not particularly convincing in either case. This is all despite the enthusiasm of the cast, a large percentage of whom are members of the travelling communities (alongside some settled actors like Murray, Coonan and McGlynn). It’s actually very obvious they’re at least admirably trying to be convincing, even as the scripting and direction ensure they can never possibly manage such a thing.

The film doesn’t have anything of note to say about the culture it represents – again dealing with shorthand and stereotypes wherever possible. The documentary Knuckle was a far more insightful portrayal of the unique, fascinating traveller culture. KotT, despite tackling basically similar subject matter, comes across as a direct-to-video exploitation flick rather than a sensitive portrayal of an often misrepresented community.

With a plot that’s about as adventurous as a particularly uninspiring episode of Hollyoaks, there are hints that visually at least O’Connor and his returning cinematographer collaborator David Grennan have a bit of ambition. There’s a nifty enough shot or two during the film’s first ‘major’ sequence at a traveller wedding. But later visual flourishes never coalesce into anything coherent, and stylistically the whole film feels ill-at-ease with itself (for example the aforementioned flight of pure, meaningless fantasy). Still, of everything the cinematography is worthiest of praise, faint though it may be. That, and a vaguely amusing use of The Final Countdown.

As it chugs past the finish line - a finish line shoddily drawn onto the ground with human blood and feces - the main impression King of the Travellers leaves you with is that it has simply wasted your time while concurrently and definitively insulted your intelligence. Plagued by amateurish direction and downright incompetent writing, it’s a film that’s near impossible to like. It’s easy for me, the smug reviewer, to sit here spewing vitriol at a local production so many people have put time and effort into (‘if you can’t say anything nice…’ springs to mind). But we the audience deserves better than this shit. The cast and crew deserve better. The travelling community deserves better. The Irish film industry deserves better. Basically, everybody deserves better than King of the Travellers.

I, as you may have gathered, despised this movie.
Posted by thecynicalgamer at 8:07 PM