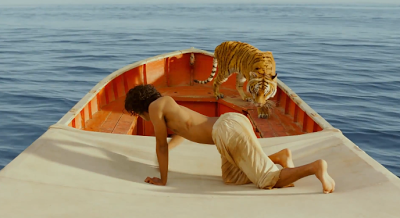 "I'll tell you a story that will make you believe in God" boldly claims the protagonist of Life of Pi early on. Well, Ang Lee's adaptation of Yann Martel's novel doesn't fulfill that promise of revelation, not by a long shot. I entered a cynical atheist, I emerged a cynical atheist. Still, there were some pretty images between the aforementioned entrance and exit, and some neat stuff with a tiger in a lifeboat.

Life of Pi is a film that somewhat stumbles at the first hurdle, breaks into a breathless sprint in the middle, and than fucks up the last stretch embarrassingly. Pi - a self-appointed nickname as his birthname Piscine rhymes with 'pissing', much to everyone's amusement - is a young Indian boy with an interest in culture and religion. His parents own a zoo, although finances from abroad tempt his father to emigrate and sell his exotic animals to start a new life. Unluckily, this exodus interrupts Pi's first love, so he departs with a heavy heart. Then there's a shipwreck, and Pi ends up on a boat with a tiger called Richard Parker.

The film is divided into three very distinctive acts. The first and the last - which are effectively extended pro- and epilogues - are split between flashbacks and a conversation between a middle-aged Pi (Irrfan Khan) and a writer (Rafe Spall). Good luck with these sections - I hated them. They condescendingly attempt to articulate the film's spiritual and allegorical messages. Some may enjoy these lightly philosophical ponderings - the message is basically 'belief systems are awesome, even if they're completely fictional!' - but I found them far too simplistic to convince. It tries to craft an all-encompassing allegory of religious unity, but it's handled with the subtlety of a hammer to the noggin. I am regularly eager to experience films reflecting on beliefs I may not subscribe to - I'd never have appreciated the glorious work of Terence Malick otherwise, or the beautiful and moving Spring Summer Autumn Winter... And Spring - but this new-age bullshit is far too twee and insufferable, and drags the film down for significant portions of its running time.

It's fair to say you'd be better off leaving the cinema when the film's fantastical second act draws to its natural conclusion, as the extended epilogue sours the power of that absolutely fantastic middle hour (although the scene where Pi articulates an alternate - or indeed 'real' - interpretation of the events we've just witnessed is undoubtedly intriguing - shame it only serves to further the film's cop-out final message). It's just a teenage Pi (Suraj Sharma), the tiger, a lifeboat and the ocean re-imagined as an astonishing CGI dreamscape. It's a really peculiar setup, no doubt about it, but it makes for compulsive and almost dialogue-free cinema. Pi trying to tame the beast is engaging and often thrilling, and this peculiar 'relationship' / survival drama is frequently punctuated by smartly realised setpieces. It's remarkable how imaginative the film is with a setting as dramatically limited as open water.

A few weeks ago The Hobbit soured my opinion of CG technology significantly (said opinion was pretty low beforehand), but Pi is an invigorating example of how creative use of technology can benefit a film's visual identity. Almost every frame in the film is cleverly composed, and the film's cinematography triumphs are most evident as the shipwrecked duo experience all manner of surreal sights. From the hyper-real reflection of the stars and lifeboat on a still, moonlit ocean to a hypnotic drift through a school of neon jellyfish, here we have a film taking full advantage of digital filmmaking's potential. I'm indifferent to Ang Lee as a director generally - I love his Wedding Banquet / Eat Drink Man Woman double whammy, but find his films a tad bland otherwise - but he's wildly ambitious here and it pays off massively. Kudos, of course, are also due to cinematographer Claudio Miranda and the film's digital artists. They completely show up Peter Jackson and WETA's hugely disappointing work on December 2012's other major CGI spectacle. Oh, and Richard Parker is beautifully rendered and very convincing. It acts and looks more like a real tiger rather than a CG tiger, which I guess is quite a significant technical accomplishment!

And here comes the paragraph I never thought I'd write: 3D occasionally enhances this film. I hate 3D as a rule, and only ended up seeing this in that wretched format due to timing issues (it's the first film I've paid to see in three dimensions in around nine months). Colour me surprised that Lee and his team understand and attempt to directly address the restrictions of this distracting method of presentation. Sets are clearly designed with depth in mind, such as a swimming pool during the film's opening sequences. Several separate shots are superimposed on top of each other in a couple of scenes to take advantage of that inherent 'layering' effect that makes other 3D films look like weird pop-up books. Objects are pointed into the screen rather than out. In the film's cleverest utilisation of the technology, Lee boldly changes the 16:9 aspect ratio to 2.35:1 for a single scene in order to give 'jumping fish' the empty black space necessary to exit the frame convincingly. It would be a stretch to say I am now a 3D convert - for 90% of the film, it's of little importance and occasionally distracting. I'll still avoid it in other films. But with a little bit of imagination and - vitally - a vivid colour palette, Life of Pi is easily the best 3D film I've had to endure. Faint praise, maybe, but praise nonetheless.

It's a shame that the film's irritating themes get in the way, then, because for over sixty minutes Life of Pi is a technically accomplished gem with a compellingly offbeat story to boot. That the other forty-five minutes are spent fumbling so awkwardly is disappointing, because without its tendency to drift condescendingly towards wishy-washy spirituality Life of Pi would be a great film. An hour of greatness will have to do.
Posted by thecynicalgamer at 11:30 PM