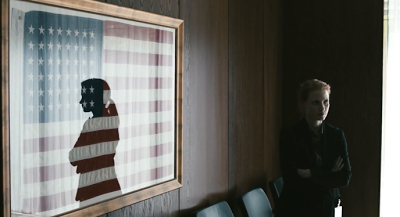 (Although everyone knows the ending to this particular tale, this post is spoiler heavy)

Within reason - reason being a month or two - I'm pretty forgiving of delayed international release dates given the practical and commercial complications of theatrical film distribution. But it's been a long month since the discourse concerning Zero Dark Thirty kicked off in earnest following its limited Stateside release. Kathryn Bieglow's feature length retelling of the hunt of Osama Bin Laden was immediately greeted by rapturous critical praise, but it wasn't long before the film started being accused of questionable ethics and a pro-torture viewpoint. This very vocal discourse has seen passionate arguments from both sides, and many cinematic conspiracy theorists went so far as to suggest the film's controversial reception ultimately denied Bieglow a 'best director' Oscar nomination (not that the Academy Awards mean anything anymore, but still). It was fascinating to see a mainstream film receive such a divisive reception, but of course it all couldn't really resonate in any meaningful way until I got the opportunity to see the damn film for myself. Cursed staggered releases!

Much of the debate has focused around the film's first act, in which a number of prisoners are tortured by CIA operatives - primarily Jason Clarke's Dan and Jessica Chastain's Maya - in an attempt to extract information concerning al-Qaeda. Bieglow has been accused of justifying the use of torture as a means of interrogation, but I have to agree with her own stance on the issue: depiction is not endorsement. While the film's characters do indeed extract some very, very limited information resulting from their use of appalling torture methods, the film never condones such actions. Indeed, the camera devastatingly stays focused on torture victim Ammar (Reda Kateb) as he is repeatedly humiliated and abused. No one can justifiably be stripped of their humanity in this way, and the audience is shown this morally repugnant tactic in all its horrific, dehumanising detail. Even the CIA characters show remorse for their unjustifiable actions - Maya is near physically ill after her first full-on experience in a black site torture chamber. The film does not for a second suggest that torture was the only possible investigation method, and I struggle to see how it anyway justifies the use of repugnant Medieval tactics. It shows torture because it was purportedly part of the real-life narrative, and to not include these hard-to-watch scenes would have been much more objectionable. Bieglow's search for truth and meaning must encompass a warts-and-all approach, otherwise what is the point?

Elsewhere, American taxpayers may be disappointed to find out their money was being spent buying top-of-the-range Lamborghini's for wealthy informants in exchange for a single phone number. How based on truth any of this is we will perhaps never know - indeed, the film's access to inside sources and supposedly classified information has been another source of controversy. But the film does a great job of crafting a compelling cinematic story - if truth was bent (as all films based on true stories inevitably do) it is done so in the spirit of crafting a thematically complex screen thriller. For a good half of the film, Bieglow breathlessly covers the 'war on terror' over a period of nearly a decade. Innocents - Pakistani, Afghan, British, American, many other nationalities - are killed without provocation. Maya becomes increasingly desperate and driven following the death of one of her friends and colleagues (Jennifer Ehle) at the hands of suicide bombers. Sources are found and lost. Information is verified, debunked and then verified and debunked again. Bribes, interrogations, high-tech tails and good old fashioned detective work are employed by the CIA in their efforts to track down public enemies number one, two, three etc... It's fascinating stuff and well-paced, although it's easy to get lost in the sheer bulk of names, places, jargon and acronyms. For a film that's already two and a half hours long, some extra breathing space would not have gone amiss. Luckily a heap of familiar faces in supporting roles - including Mark Duplass, James Gandolfini and Mark Strong - ably complement Chastain's impressively committed performance.

Eventually, we reach the inevitable climax - perhaps modern history's most famous covert military operation. This was perhaps the film's single-most challenging sequence - creating a setpiece out of Osama bin Laden's death. Bieglow handles this artfully. This is not a romantic, triumphant portrayal of American military action - it's shown as a brutally methodological operation. Only those who were there could account for its accuracy, but the lengthy sequence toes a potentially troublesome line expertly. While it works as a thrilling setpiece, it's also a sobering look at the harsh reality of military intervention. The silenced bullets not only kill armed 'adversaries', but innocent women and children also get in the way. The specialist soldiers even put a few extra bullets into corpses to ensure they'll stay down. There's an argument to be made that such an incident should not be the domain of Hollywood cinema, but it's hard to imagine it being handled anymore matter of factly than Bieglow achieves here.

Operation successful, the troops desperately gather intelligence materials and they are flown back to base, accompanied by public enemy number one in a bodybag. There is some minor self-congratulating, but there is no excessive fist-bumping here. No waving flags, soaring soundtracks or cheesy cutaways to celebrations back at base. In the final scene, Maya is alone in a carrier jet, being flown home (wherever home may be). She has spent an entire decade hunting for this one man and his associates - she was convinced nothing else mattered. Now she has finally achieved her goal, but at what cost? She has been completely consumed mentally and physically by the search, and countless lives have been lost. All they have to show for it is a bullet-ridden corpse. Is this a victory? Technically perhaps, but a horrible sort of victory, in which morals have been abandoned and billions (trillions) of dollars spent. All in search of a biblical sort of revenge - the death of one man. It's not only the torture victims whose humanity has been compromised. While Bieglow undoubtedly shows some level of respect for the work of the armed forces, Zero Dark Thirty chooses to conclude on a devastating character note, far removed from the imperialist triumphalism a lesser film or director would surely have embraced.

The conversations surrounding Zero Dark Thirty had almost led me to expect a piece of ethically dubious jingoism and pro-military propaganda. It is with relief that I instead discovered a film of complexity and thoughtful moral ambiguity. It's certainly a more provocative piece of work than some other recent Hollywood reimaginings of true events - this is several times the film Argo is, for example. I'd stop well short of 'masterpiece' - the film's second act can prove over-dense and the visual design, with some exceptions, is relatively uninspiring. But Zero Dark Thirty is still a smart, superior and challenging political thriller, and certainly bolder and more ambitious than pretty much every recent studio picture. While it's encouraging to see a mainstream release provoke a variety of critical and even political responses, let's hope the discussions don't drown out the many qualities of what is above all a cleverly crafted piece of cinema.
Posted by thecynicalgamer at 3:04 AM