The fruits of labour 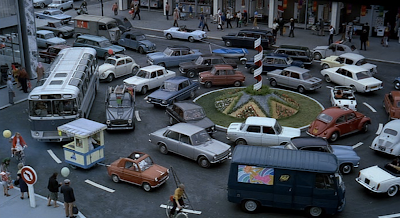 Jacques Tati, the legendary French comedian and filmmaker, belongs in an elite group only really occupied by a handful of personalities from cinema's vast, diverse history. He is a definitively cinematic comedian, much like Charlie Chaplin or, to use the most appropriate comparison, Buster Keaton. Tati is not only a brilliant slapstick funnyman - even the basic mannerisms of his most famous creation Moinseur Hulot are inspired - he is a brilliant filmmaker. His sense of mise-en-scene, his ability to perfectly soundtrack a scene, his (extremely costly) eye for insanely elaborate sets and choreography - put simply, no other medium other than film could possibly have granted Tati the ability to realise his triumphant vision. He dabbled in circus and other outlets, but cinema was his home.

Speaking of homes, Tati lost his as a result of the spiraling costs of his masterwork Playtime. A common compliment paid to many is they make it look effortless - when it comes to Tati, what impresses is that every individual ounce of effort he put into the production is visible on screen. Like Keaton, Tati pushes not only himself but the medium in risky directions, and lands his tricks with nary a stumble.

Immediately following a credit sequence, we're shown an extravagant airport set - a huge space full of parading extras and hidden architectural quirks. It's a slow start, but merely the first beat in a film whose pacing is impeccable - it's a film that just adds layers and layers until it reaches its thrillingly rich climax. All in the finest 70mm stock the mid-60s had to offer.

The film plays out in something like accelerated real-time, and flows naturally through a series of increasingly elaborate sets (you can easily see every Franc of the epic budget and hour of the multi-year production schedule on-screen). Tati - appearing again as Hulot, although with the character absent for large chunks of screentime - leads us on a tour of a surreal (and borderline nightmarish) Paris of modernity gone wild. The landscape has become dominated by garish, uniform grey buildings - the iconic sights of Paris only visible in the distance or glimpsed occasionally in brief reflections. It's exaggerated, but also a worryingly acute reinterpretation of a twentieth-century cityscape. Technology aimed at improving efficiency here only serves to make everything less useful - such as a brilliant scene featuring a doorman attempting to operate a mind-bogglingly complex electronic intercom. This conformity and excess is an international one too, briefly illustrated by a poster of London that exactly matches the sights of this ugly Parisian business district (or is that entertainment district? Residential district? Tourist district?).

Hulot, for his bumbling part, gets lost in this mess, with the uniform architecture and general busyness of the business day sabotaging his attempts at attending a simple meeting. As well as Hulot, we follow a group of English-speaking tourists - who seem less interested in the culture of the city and would rather get wrapped up in a minor variation of the same mindless, obscene consumerism they find at home (a vacuum cleaner with headlights attracts more attention than the Eiffel Tower). Only one woman - played by Barbara Dennek - shows any interest in exploring the city (even if it's through a camera lens). Alas, the rush of modern life means she struggles to communicate with the people or the culture to any meaningful degree, constantly being pushed onto the next department store.

While this is all terrifically funny, there's also a layer of incisive cynicism that colours the tone of the production. It's a tough but fair look at a society dominated by emotional distance and empty conformity. One sequence - in which Hulot visits the apartment of an ex-army buddy - is more Haneke than Keaton, where we're implicated as voyeurs, watching from the sidewalk as the characters in multiple apartments go about their business. They themselves also morph into voyeurs of a sort, all ending up in front of a television. While cheekily presented (a joke is never far away), these scenes are depressing & scathing at the same time. Like Mon Oncle and his other films, there's a sense of sharp social commentary underpinning the comedy - although Tati uses age old comic tropes like panes of glass or slipping & falling on the ground, they are never empty gags.

While there are moments almost shocking in their cynical tone - and, forty-five years later, Tati's observations are as resonant as ever, and many viewers will surely relate to concepts explored - this is all pre-empting a very different tone that builds in the second half. Playtime settles on a path of escalating energy. It's anarchic, but completely controlled anarchy in the guiding hands of a masterful conductor. His precision is astonishing - using gigantic sets and escalating setpieces (featuring dozens and dozens of extras and hundreds of props), there's a hell of a lot going on, but it's always absolutely confident. Individual frames can often contain a multitude of jokes - we're active participants in the symphonic cacophony, frantically engaged with the wealth of imagery being presented and working out its multitude of subtleties. There's brief visual gags, comical sound design, an inspired 'glass door' joke, wacky characterisation, extended running gags built on repetition and variation (some that last almost the entire film)... almost every type of humour is used, although - as is Tati's way - with a bare minimum of dialogue. He even manages hilarious jokes out of chairs, light-fittings and neon signs - Tati's imagination was genuinely in a league of its own.

The patrons of an unfinished, disorganised nightclub begin to drop their inhibitions, and the horrid venue is gradually ripped apart. It's a literally explosive series of events, as the various customers at the bar / restaurant sweat furiously and find delight in both the slow destruction of the club and the companionship of their fellow diners & dancers. A series of bands play vibrant, toe-tapping compositions that add melodic momentum to proceedings. The tempo shifts giddily effect over the course of nearly an hour straight of escalating mayhem - brilliant, inspiring mayhem.

Hulot, the tourists, the Parisians dance until dawn, and they emerge into a newly revitalised Paris - a city full of life and freshly-instilled enthusiasm. Some of the grey garish structures remain, but they're given a new context in light of the people's new, wildly optimistic outlook on life - with the set design and cinematography utilising bold colouring to craft a visual contrast to the previous monotones. The final minutes of the film are like a comic ballet - an infectiously cheery, multi-coloured extravaganza that must surely represent cinema's most romantic portrayal of commuting. With its dynamic, frantic traffic roundabout, a funfair merry-go-round is really the only appropriate comparison. What a leap from the rigid, disheartening conformity of earlier chapters!

Tati has instead chosen to find beauty in the gleefully rebellious nature of the human spirit, settling on brave optimism. In its breathtaking final shot - illuminated only by rows upon rows of streetlights - the director even finds wonder in the very same uniformity he saw fit to critique previously. Tati has well and truly earned our smiles and our laughs without reigning on the opportunity to make us engage with a complex thematic tapestry along the way - few, if any, films have ever so carefully built up to such a crescendo of childlike joy. Playtime indeed.
Posted by thecynicalgamer at 11:14 PM