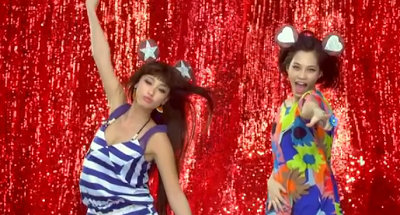 'Style over substance' is one of those infernally troublesome critical mainstays, and one alas we are forced to address early in any discussion of Helter Skelter. Here we have a film with style to spare - a film set in a world of surface-level beauty that is presented in shades of explosive red. But it's also incredibly tedious - two hours of cloyingly obvious commentary presented through regrettably extended scenes. The maddening thing is that in many ways it achieves exactly what it sets out to do.

Erika Sawajiri plays Lilico, a wildly popular Japanese 'idol' - enjoying the odd film role, but mostly living off the attention from fashion shoots and appearances on variety shows. We're granted intimate access to her private life, which it transpires is a wild, hypersexualised one. She cruelly manipulates her assistant timid assistant Michiko (Shinobu Terajima). She grows violently jealous when rival idol Kozue (Kiko Mizuhara) threatens to steal the limelight. Lilico becomes increasingly unhinged, determined to do anything to keep herself in the spotlight, even (spoiler) extreme acts of (self)mutilation.

Shame none of this is particularly insightful or remotely interesting. What themes Ninagawa - working from a manga series - appears to be trying to address are trite: the vapidness & casual cruelty of the idol industry, the emotional disconnection of fame, some broad stroke observations about 'real' beauty. These are all quite the adolescent concerns, and even then the film feels stifled by a strange thematic incoherence. The path towards violent catharsis is a wearily well-worn one, and even the inevitable climactic event merely provokes a series of redundant and confused false endings. Helter Skelter offers a whole lot of very little, further bloated by disposable subplots. By occupying a world dominated by mindless repetition and emptiness, it would be lazy of me not to offer the observation that in many ways the film could therefore be dubbed a success - one that exposes us to this all destructive shallowness more intimately than we might have liked. That doesn't make it any more bearable, mind.

There are, though, a few bright spots to make it a tad easier to digest this sluggishly paced assault. 'Bright', in fact, is one adjective we can apply liberally to the film's madly colourful production design and cinematography. Ninagawa betrays her origins as an artist / fashion photographer with insanely busy, vibrant locations that at the very least are visually arresting in their hypnotic parade of primary colours. Alas, the director and her team of fashion designers do push our tolerance for that glorious gaudiness too far (the defaced religious iconography populating Lilico's apartment is particularly ridiculous and/or obvious). But even though the framing isn't particularly inspired, effort was undeniably put into the design. Shame about the dreadful soundtrack.

A further highlight comes comes in the form of Kiko Mizuhara, the radiant model-turned-actress who was also the best thing about Norwegian Wood. She has a disappointingly brief amount of screentime here, but she uses it well, producing a character that is altogether more intriguingly enigmatic, charming and likeable than our actual protagonist. Indeed, Lilico is a pretty horrible person to spend time with. There should be no expectation for a main character to be 'likeable' or even fundamentally decent, but Lilico's morally decayed journey is merely dull, and her ultimate hunt for pop-culture immortality only rarely engaging. Perhaps a decent, well-adjusted individual navigating these waters could have been altogether more interesting - a role Mizuhara's Kozue ably fills for around ten minutes.

Helter Skelter plays out like Black Swan meets Sion Sono (specifically Strange Circus and Guilty of Romance - neither particular highlights of his filmography), but comparisons aren't favourable given the film's deep-rooted inertness. For a film soaked in weird sex and undercurrents of violence (there's also a lame, sub-Lynchian 'breakdown' scene) it's fascinating how familiar and repellant it all is. Yes, Ninagawa has perhaps succeeded in painting a scathing, disgusting portrait of a destructive, damaging industry and the various caricatures determinedly to force their way into it. That theoretical success, though, doesn't make Helter Skelter any easier to endure.
Posted by thecynicalgamer at 9:53 PM