This article is part of a year-long feature - watching and blogging about twenty acclaimed, cult, challenging and rare films over the course of 2013. The full list of films (and links to other completed posts) can be found here. Eight: an epic jaunt through the ages in Intolerance. 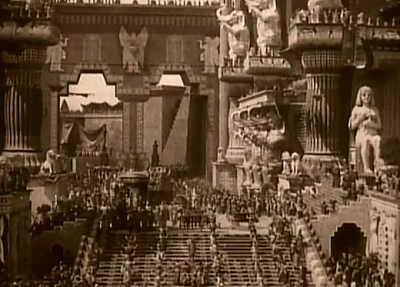 D. W. Griffith's reputation precedes him. Few revolutionary individuals in cinema history have received such varying levels of criticism. On one hand, he was perhaps cinema's first auteur, instrumental to its development as an artform. On the other, Birth of the Nation has forever tainted his name, many labeling him as a filthy racist and a bit of an embarrassment. Given the infamy that surrounds him, plus his penchant for deeply indulgent running times, I've always been a little reluctant to approach his work. But this challenge is all about confronting those second-hand prejudices and making up my own mind, so today I sat down to tackle Intolerance.

Well, first things first: Intolerance is certainly unique. The extremely apt title tells you a whole lot about what you need to know. The film is a freewheeling examination of 'intolerance' through the ages. There's four narratives running in parallel: one recounting the fall of Babylon, another retelling the crucifixion of Christ, a third set in 16th century France and focusing on the St Bartholomew's Day Massacre, and finally a 'modern day' (modern in 1916, anyway) tale about a loving couple constantly torn apart by cruel, unthinking authorities. Linked together through title cards, a recurring shot of an 'eternal' mother rocking a cradle and (more interestingly) editing, the stories reverberate with each other over the course of nearly three and a half hours. With the narrative crisscrossing and era-hopping near constantly, it resembles Cloud Atlas more than anything, albeit predating it by the guts of a century.

Ostensibly giving equal weight to the quartet of stories, the reality is only the modern and Babylonian stories truly matter here. The Galilean section might tie closely with the film's deeply Christian ideology and obsession with exploring the violent effects of religious intolerance, but it comes across as too obvious and even a little condescending in execution. The French story, meanwhile, is basically a glorified afterthought. Again, the thematic bridge is there, but it adds little of note, interrupting the more intriguing stories at almost random intervals. Generally speaking, the film is a wild melodrama that is an awfully long-winded way of presenting a pretty simplistic message. At times, especially in a borderline farcical epilogue featuring a chorus of angels forcing warring soldiers to drop their weapons, it all seems hopelessly, almost pretentiously naive in its good-intentioned but amateurishly straightforward message of Christian peace and understanding. Subtle Intolerance ain't.

On their own terms, however, the two core stories are actually quite endearing. Now, make no mistake, the first hour (or even hour and a half) is rough: establishing the various timelines and characters, it's a challenge to adapt to the film's unusual pacing, scope and early cinematic language. As shallow as it may sound, things improve significantly with a magnificent battle scene that acts as the centrepiece of the Babylon section. We can never forget this film was produced in 1916, so the sheer scale of it all - with its towering sets (later becoming an iconic Hollywood landmark), waves of extras and elaborate costumes - is still flabbergasting. As the film approaches its 100th birthday, the spectacle still impresses - the battle of Babylon being a notable highlight, but the stellar production design wows throughout. Knowing that it was all done with primitive technology makes it all the more remarkable - a trick CGI spectacles can simply never hope to repeat. It's also surprisingly visceral battle sequence, including more decapitations than I would have expected.

The modern story, meanwhile, is a slowburner but ultimately justifies the slow burn. After rambling around for an hour or so, it snaps into focus and develops as a melodramatic romance / legal thriller / anti-authority rant,. It's all pretty straightforward stuff, but handled well enough and entertaining. Things really pick up in the final hour (or 'Act II') when it all turns into a frantic race against the clock to stop an imminent execution. It is, like so much of Intolerance, straightforward and primitive, but entertainingly so. The happy ending - in which soul mates are reunited, unlike those poor Babylonian citizens so cruelly mowed down - feels hard-won, and a shame it's soured by the aforementioned obnoxious epilogue.

This extended chase sequence also illustrates the film's single most important innovation: its editing. As the film crosscuts more frantically, it links the stories in increasingly more compelling ways. This not only lends the film a momentum lacking in some of its more laborious stretches, but also shows themes and characters linked not through excessively overwritten title cards (and some of the very literal title cards on offer here are rather laughable: "Now, how shall we find this Christly example followed in our story of today?" is a personal favourite) but through cinematic form. Now, as previously stated, a lot of these ideas are simplistic to a fault, but as an early experiment in editing it's a deeply important one, and the kind of thing directors like Sergei Eisenstein would develop further and in the process change the way cinema worked forever. Although 'of its time' in so, so many ways, technically it's an astonishing achievement (Griffith also preempts Mizoguchi with his penchant of presenting rare but powerful close-ups).

Longer than even some of the more grueling modern epics, Intolerance will test the patience of many modern viewers, even those familiar with the aesthetics and language of silent cinema. It comes across like a sermon, a lecture, a class on the bleeding obvious, but also proves a valuable lesson in the language of cinema that can still educate us modern cinephiles. It's epic. It's dull. It's beautifully, jaw-droppingly extravagant. It's aged terribly. It's an ambitious failure and successful experiment. It's all these contradictory things at once. Say what you will about the film and its creator, but Intolerance at the very least is quite unlike anything else, and for all its deep-rooted flaws is still worthy of our attention. Just probably not more than once.
Posted by thecynicalgamer at 11:21 PM