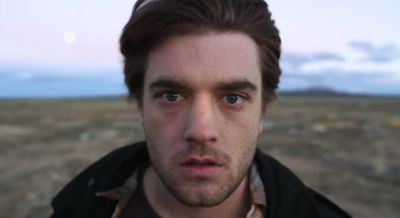 It's hard to articulate exactly why I got the unshakeable impression John Dies at the End tries too hard. Indeed, 'trying hard' is such an absolutely admirable trait, so when is the line crossed? Well, somewhere along the line it became clear to me that Don Coscarelli's film was so desperate to please, so self-consciously wacky, so determined to emerge from post-production to instant 'cult approval', that it all got lost in its own smug sense of anything-goes insanity.

I'm not hard-wired to dislike small, low-budgeted films with a quirky sense of humour, farcical fantasy and self-aware ridiculousness. Raimi's Evil Dead films are deliriously entertaining treats, a slap to the face of full-blooded craziness. Nobuhiko Ôbayashi's Hausu's wildly imaginative, genre-busting blend of pop music video, slapstick comedy, haunted house horror and bubblegum commercial fills me with giddy joy everytime I watch it. But those films come equipped with visual verve, manic intensity and a general sense of pop artistry that, alas, John Dies at the End solely lacks. Which is a shame, given Coscarelli's last major production was Bubba Ho-Tep, which, while hardly a masterpiece, generally managed to achieve that sense of gratifying eccentricity.

Problems here, though, start with the core narrative, based on David Wong's (aka Jason Pargin) Internet-serialised novel. I'm not going to bother explaining it, but there's various inter-dimensional shenanigans ranging from psychic canines under the influence of drugs with consciousness to people getting infested and promptly exploding as a result of extra-terrestrial flies. This is all experienced through the eyes of David (Chase Williamson), friend and 'business' partner of the eponymous John (Rob Mayes) - they're like slacker ghostbusters, for lack of a more efficient descriptor. Alas, both lead actors have the charisma of your average bucket, and the supporting cast fare little better.

As the film haphazardly attempts to build a coherent narrative around its parade of increasingly ludicrous happenings, I found it impossible to care about what was happening, how it was happening or why it was happening. There's no pace, there's no momentum, just an attempt to pile on a series of surrealism that we must surely enjoy, because of its innate what-the-fuckery. It wants to be please, but merely grows increasingly dulling in its supposed unpredictability. By the time our heroes face off against some other dimensional demi-God monster-thing for some reason, I was willing the credits to roll and draw this empty assault of random incoherence to a merciful halt.

A framing device sees David telling this 'fascinating' story to reporter Arnie (Paul Giamatti), which frankly just sort of comes across as an attempt to buff up a lean running-time, despite a final and deeply uninteresting twist. There's also a clunky, pointless voiceover from our protagonist, which adds to a strange non-cinematic feeling overall (more on that in the next paragraph). It's perhaps not surprising that the film's single-most satisfying sequence is a prologue almost entirely standalone from the rest of the film, in which David and John face off against a meat monster, penis doorknob and demon who erupts into a pile of snakes. It's as desperately silly as the rest of the film, but mildly amusingly so, backed up by the best effects the film has to offer.

Shame Coscarelli's team blow their effects-load so early, because the final act is irreparably damaged by the shoddiest effects this side of a SyFy channel production. The green-screen work is neither purposefully farcical enough nor technically proficient enough to be so bad its good - it's just shit. It's just one example of how this film is cursed with an unflattering HD transfer that ceaselessly shows up all the visual failings of the film. Indeed, if it had of had a bit of imagination in the direction, editing and cinematography departments a lot of its narrative failings could have been forgiven. Alas, it's all put together with little skill. One of the few visual indulgences is a vomitous orange hue applied to a good third or even half the film. It was either shot poorly or the raw digital footage incompetently graded - either way, it looks appalling. A handful of striking images aside, a made-for-TV or DTV look pervades.

I know what you're thinking - technical failings are unfair to criticise in a film whose proudly lo-fi director admits they were working with 'modest' finances. But forgiveness only goes so far, when countless films operating on similar or indeed lessers budget have done absolute wonders with the most minimal of resources. Indeed, having only last weekend been wooed completely by Upstream Colour, perhaps my standards have been temporarily set unreasonably high. I take no pleasure in ragging on the little guy, but John Dies at the End is just too deeply unsatisfying to gift a 'get out of jail free' card too. It audaciously requests to be loved, but offers so few good reasons to respond with the requested affection.
Posted by thecynicalgamer at 9:39 PM