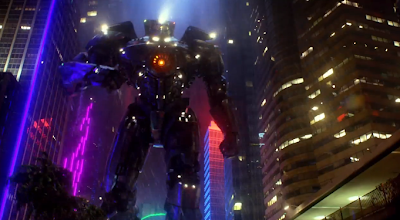 There's a moment as Pacific Rim enters its third act where Commander Stacker Pentecost (Idris Elba) confesses the secret hinted at throughout the film. As a result of his piloting of nuclear-powered Jaeger (aka giant robot), he has suffered radiation poisoning that is slowly eating away at him. Basically, he's close to death, although a couple of nosebleeds are the only indication of this. To save mankind (specifically Tokyo) he had to sacrifice himself. It marks the only moment of Pacific Rim where it takes on any degree of contemporary relevance - some hints of allegorical depth as it teases delivering a world inspired by the 2011 Japanese tsunami and subsequent (and ongoing) battle by brave workers to control the damaged Fukushima nuclear plant. If the original Godzilla (1954) was a post-Hiroshima/Nagasaki monster movie, is Pacific Rim the post-Fukushima one? The genre attempt at Land of Hope?

Unfortunately, such promises of depth are unfulfilled, never coming to anything near fruition. Indeed, two of the film's most pivotal climaxes directly rely on a nuclear powered robot to save the day. For a film that hints at being inspired by a real catastrophe, its (unintentional? hypocritical?) subtext of " woo! nuclear power is awesome!" is baffling, if not straight-up insensitive. Del Toro acknowledges that there are deeper concerns that could be reflected here, but steadfastly refuses to actually address them.

Is it an exercise in futility to expect allegorical, thematic and contextual depth in a film so unashamedly focused on giant robots beating the shit out of giant monsters? Regrettably, del Toro invites such criticisms by directly alluding to works that manage to provide accessible, simple pleasures while actually engaging the intellect of the audience at the same. The aforementioned original Godzilla may offer ridiculous 'man in suit' monster action, but is also a damning, cynical and ultimately devastating plea for mankind to stop developing and testing nuclear weaponry. The Evangelion series - from which del Toro liberally adapts numerous central conceits and images - contains no shortage of spectacular Eva v Angels action, but is propelled far beyond that as a result of its experimental streak, psychological depth and provocative imagery. Hell, the film rips the voice of GLaDOS (Ellen McLain) directly from videogame series Portal, but offers none of the witty script subversion those two games are famed for. Pacific Rim is constantly flagging its geeky heritage & inspiration, seemingly without realising the comparisons are not favourable.

The script overall is as condescendingly shallow and exposition heavy as any modern blockbuster, to the point of illustrating genuine disdain and distrust in the audience as it over-explains simple concepts at the cost of actual humanity. It's baffling that del Toro - who I don't admire quite as much as most, but consider a generally talented, unique cinematic voice - signed off on this, let alone co-authored it with hack-for-hire Travis Beacham. Concepts are initially promising, but always underdeveloped. The 'neural handshake' used by pilots to 'mind meld' in order to control their giant robots is a neat idea, for example, but is never engaged with at anything more than a surface level. Logic is made up as it goes along, but really we probably should have expected that.

Barely any of the characters - who we spend more time with than those hoping for epic destruction porn may have hoped - are credible, let alone likeable. Mako (Rinko Kikuchi) is the closest thing to an interesting individual the film offers - the flashback to her youth and her final (unsubtitled) "sensei aishite imasu" come closest to achieving some degree of poignancy (cheesy poignancy, of course, since the film constantly wafts of mozzarella). But she's relegated to 'female sidekick' for huge chunks of the narrative, and it's no surprise when our bland protagonist Raleigh (Charlie Hunnam) is relied upon to help her achieve anything. He, of course, is the one who saves the day, in an ending that is pretty much the same basic one seen in The Avengers, Oblivion and Independence Day. There's more than a few narrative similarities to the latter (not least the famous-before-release "cancelling the apocalypse" speech), actually, but even more to - frustratingly - Godzilla (1998), with several of the plot beats effectively identical. Personally, I can hack something being formulaic if you take inspiration from the best. But Pacific Rim is derivative of the worst.

Even the underachieving script is dragged down further by almost universally poor performances. Elba chews the scenery to a frankly ludicrous degree, which would have been OK had the film had more of a sense of irony about itself. The cast is theoretically international (which, at least, makes a change in whitewashed Hollywood), but they're all underutilised, and dreadfully unconvincing when they're actually required to speak. All the Jaeger co-pilots are effectively interchangeable - good luck giving a shit about any of them. Worse, though - and with advance apologies to It's Always Sunny in Philadelphia fans - are Charlie Day and Burn Gorman as a pair of wacky, comedy relief scientists who you kind of want to expire at the soonest possible opportunity just so they'll shut up (spoiler: they don't). Only Ron Perlman doesn't embarass himself too badly, but only because he just plays the same charismatic badass he always does in a cameo role. He also enjoys the films only genuinely amusing punchline as he's devoured by a baby Kaiju - but a redundant post-credits scene assures us he is well and truly alive for any theoretical sequel (unlikely, given the concept's niche appeal and allegedly massive budget).

So: 900 words later and we still haven't directly addressed the film's selling point - the robot vs. monsters action. Well, for around twenty minutes out of a 130 minute plus running time, the film delivers in that regard. del Toro and cinematographer Guillermo Navarro's palette is, for the most part, vivid and clear, if crippled with an unfortunate (if likely budget-mandated) penchant for framing all their action on rainy nights or in the middle of the ocean. The neon-hued Hong Kong scenes are particularly visceral, reminding us of the visit to the black market in Hellboy 2. It's also the venue for the film's biggest setpiece, right in the middle of the film (following a good hour of hundrum plot development). It's the one from the trailers, and when the film's simple, unpretentious pleasures are most obvious. There's robot rocket punching, luminous acid spewing monsters, and Jaegers being hurled a kilometre at a time, taking down a couple suspension bridges in the process. It literally even takes flight, taking the action into the stratosphere (if in a less effective way than the prologue of Evangelion 3.0, this year's definitive giant robot opus). This single gigantic setpiece is a cut above your bog standard blockbuster, with a visual clarity and scale that shames the majority of incompetents currently producing blockbuster cinema. It's robot v. monster action dialed up to ten (not quite eleven), and it doesn't disappoint.

Same can't really be said for the film's two other expensive setpieces. The first is more of a teaser, a stormy 'at sea' battle that does the job, but not particularly well. The final, underwater battle is much worse. With its dark, muddy visual delivery, it's the direct antithesis of its city-based predecessor, making it increasingly hard to follow (or even care) what Jaeger is attacking what Kaiju (indeed, out of the four main Jaeger's featured in the film, the only unique one is destroyed about three minutes after it is dispatched, leaving only the interchangeable ones behind). In fact, it's more reminiscent of the incoherency of a Transformers battle scene than the stark fluidity of Pacific Rim's own centerpiece. What I wouldn't have given for a major battle set during bright, crystal clear sunlight to truly show off the film's effects work.

But perhaps it wouldn't have mattered - as briefly spectacular as the film's selling point action is, the film has clearly blown its load early on, ensuring the homestretch feels flat and repetitive, almost completely lacking the verve that impresses during the film's best half-hour (there is a neat bit with a sword, I guess). Pacific Rim is full of city-levelling bangs, but the overall impression is somewhat of a whimper, even if we're willing to forgive its inherent shallowness. Pacific Rim asks the audience for a lot of concessions, and only rarely is it worth forgiving. I tried to leave my brain at the door, but the little shit kept coming crawling back.
Posted by thecynicalgamer at 1:44 PM