In the garden of Eden, baby 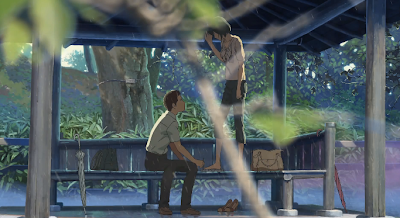 Say what you will about Makoto Shinkai, but the man is efficient. It doesn't seem too long ago at all that I was sitting here pondering the wunderkind's Ghibli cover-version Children Who Chase Voices from Deep Below. Given the intensive labour involved in a lavish and predominantly hand-drawn anime production, one would expect a slightly slower turnaround - especially from a director who does a lion's share of the work himself (although his production team has modestly expanded since his early solo productions). That said, with a running time of only forty-five minutes, that's effectively the work cut in half, so it's no surprise we didn't have too wait too long for Shinkai's latest (he even stuffed a short film in between the two as well).

Those who felt the more fantastical tone & setting of Children... didn't compare favourably to Shinkai's more muted 5 Centimetres Per Second / Place Promised in our Early Days or the poignant sci-fi of Voices of a Distant Star will find themselves more at home here. Militantly grounded in a recognisable reality, The Garden of Words instead offers purposefully timid, lightly charming romance. It's the same basic formula Shinkai riffed on in his three early films - all bittersweet relationship studies, in their own way. This fits snugly into his filmography, and that's for better and worse.

Need I even state that it's breathtakingly animated? Shinkai's storytelling preoccupations ensure his films are overall generally less interesting that some of his peers, but in terms of raw craftmanship he's pretty much operating in his own sphere. And that goes for animation generally, not just the Japanese variety. Bathed in beautiful raindrops, the film pulsates with life - lush vegetation, sweeping cityscapes and an admirable obsession with micro-details. From the gorgeous Tokyo park where a majority of the 'action' (I use the term rather loosely) takes place to the stunningly drawn shoes (!) that play a pivotal role in the plot, it is never less than a work of genuine technical beauty. Even the colour-coding - much of the illustrations bathed in a light blueish-green hue - is one of pure romance, the film seemingly taking place in a perpetual, idealised magic hour that live action cinema could never replicate.

The storytelling cannot hope to measure up. The narrative concerns Takao - a teenager unsure what to do with his life - and Yukino - seemingly an office worker going through various trials of her own. They meet in a park one wet morning during Japan's rainy season. They silently vow to meet there every rainy morning, requiring them to skip school and work respectively. Yukino inspires Takao to take up shoemaking, while Takao helps Yukino confront her tribulations. As something resembling a romance blossoms, it's revealed (not entirely convincingly) that Yukino is actually a teacher in Takao's school, ensuring any romantic developments are denied.

It's serviceable, simple stuff that renders potentially iffy subject matter absolutely inoffensive - not remotely original or surprising, but not short on good intentions or pleasant little moments either. There are plenty of quiet, subtle flourishes, and dialogue is pared back to a minimum. Ultimately tensions boil to the surface and Shinkai resorts to a scene of the gravest melodrama, Yukino bursting into tears in Takao's arms - the moment when the film's otherwise serviceable earnest tone veers into soap operatic territory and comes across as merely ridiculous. Shinkai course corrects somewhat with a sort-of music video like epilogue - a trick he also utilised in 5cm per Second - but really there's not a surplus of grand thematic insight here. It's an unpretentious, familiar tale of socially-restricted emotional connections: nothing more, nothing less.

Shinkai has yet to prove himself an auterial force on the scale of, say, Mamoru Hosoda, and certainly I'd be intrigued to see him collaborate more in terms of scripting to take his work down some alternative avenues. Even having tried something new in his last film, there's still the sense he could damn himself to one trick pony status. At least it's a watchable trick. The Garden of Words is a modest, affable little film that boxes somewhat above its weight due to its intoxicating visualisation. It might not melt your heart to the degree Shinkai clearly hopes it will, but it irresistibly massages your eyes.
Posted by thecynicalgamer at 9:26 PM

Email ThisBlogThis!Share to TwitterShare to FacebookShare to Pinterest
Labels: 2013, analysis, anime, film, japanese cinema, makoto shinkai, review, the children who chase voices from deep below, the garden of words