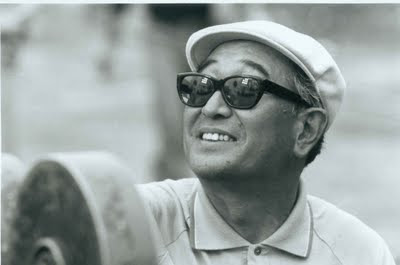 This list doesn't contain Seven Samurai. Blasphemy, you yell! Perhaps. Seven Samurai is for many a - deserved - highlight of the career of one of cinema's most accomplished masters. But both before and after 1954 Akira Kurosawa made a staggeringly large number of truly great films. Five films is a restrictive number. Hell, as I said I haven't included his best known work, which is by all accounts inspired cinema. Yet here are five that for me that defined the career of Japan's great auteur.

Rashomon (1950): For me, watching Rashomon was revelatory. It wasn't the first Kurosawa I'd seen, but it was still a massive surprise. That this film was made in 1950 is absolutely staggering. It's structural inventiveness (four takes on the same story, told by various participants in a woodland murder) and moral ambiguity still make it seem fresh and innovative, sixty-one years on. It has a sense of humour, stunning performances, and trusts the audience to interpret the conflicting viewpoints on screen for themselves. It also features a powering performance from Toshiro Mifune, a character whose dominating screen presence would be a defining feature of many Kurosawa films to come.

Ikiru (1952): Famed for his period pieces, Kurosawa regularly explored contemporary issues too. Indeed, the early 1950s found Kurosawa reflecting on Japan coming to terms with the profound suffering during the previous decade. This came out most obviously in the decent but awkward I Live in Fear. Ikiru is much more effective. The story of one man coming to terms with his mortality and trying to live life to it's fullest during his final days is more grounded and engaging. With a central performance by Kurosawa regular Takashi Shimura, the film is probably the most emotionally involving of the films listed here. A beautiful piece of cinema, one of the all time greats and a look at post war Tokyo. The final act also shows Kurosawa's willingness to break established narrative rules as he takes the story in unexpected directions following what you may have thought would be the natural conclusion.

Yojimbo (1961): Kurosawa wasn't always the most fun of directors, although there are plenty of humorous moments dotted throughout his films (Seven Samurai particularly has plenty of laughs). Yet Kurosawa never let his hair down more memorably than in Yojimbo and its sequel Sanjuro. Yojimbo is the tale of a samurai Sanjuro - Mifune again - riding into a town engulfed in a conflict between two different tribes. Our hero quickly begins to play them against each other as they individually seek his services. It's terrific fun, everything done with a sense of playfulness absent from many of Kurosawa's works. It also makes the bursts of gritty violence more shocking when it eventually does all boil over. Overall, though, it's a great story of one man against ludicrous odds, with only his wits to get him through. While Sergio Leone's excellent remake A Fistful of Dollars is also a classic, the original, as it always does, abides.


Ran (1985): Ran is the film Kurosawa was always going to make, the natural progression of his work thus far. After a dry run with the solid Kagemusha (most notable for the gorgeous watercolour dream sequences), Ran is a film for the ages. It almost didn't get made after a backlash against Kurosawa in his native Japan. But with foreign encouragement - including from George Lucas and Martin Scorsese - we finally got what could easily be called Kurosawa's masterpiece. Breathtaking cinematography, a stunning recreation of feudal Japan and astonishing performances (especially from yet another recurrent Kurosawa presence Tatsuya Nakadai in the lead role, and Pita as the loyal Fool) define this tale of a Japanese Lord who descends into madness after the betrayal of his three sons. It may be an adaptation of King Lear - and the most accomplished of Kurosawa's numerous Shakespeare adaptations at that - but this is distinctly the voice of Akira Kurosawa: the glorious culmination of all his period pieces in one spectacular film.


Dreams (1990): Picking this is a bit of an indulgence on my part, especially considering its inclusion directly excluded Seven Samurai. It's kind of appropriate though, considering Dreams - or Akira Kurosawa's Dreams at it is often aptly billed as - is itself an indulgence. One of the last films of an old master, it certainly isn't without flaws. The first three Dreams (the opening section with the beautiful traditional Japanese dance is my favourite) are arguably stronger than the rest, the thoughtful pacing can make it tough going, and the whole thing is basically a few short films put together. But it's a beautiful piece of cinema, a very personal labour of love from an elderly Kurosawa. The cinematography and strange, supernatural stories recall Kobayashi's Kwaidan - especially in the blizzard story - but these are the innermost thoughts and dreams of Kurosawa. A flawed indulgence that, for me anyway, easily overcomes its flaws. I first caught a few segments from it on late night TV as a teenager, when I was unfamiliar with Kurosawa's other work. It has stuck with me since.