Review: The Man from Nowhere

Does it go anywhere? 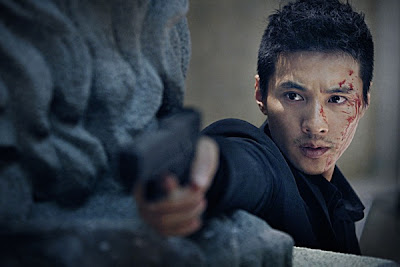 If there's one thing we should admire the new wave of South Korean directors for their fondness for fucking with genre. You've got Chan-Wook Park, who really made his name with a trilogy of subversive, interesting revenge films. He followed it up with the anti-Twilight Thirst and, well, whatever the hell I'm A Cyborg was (Romance? Sci-fi?). Joon-Ho Bong has proven himself to be a man unafraid of twisting genre conventions - putting his own slant on the procedural detective drama, murder mystery and monster movie with much success.  We can't forget Jee-woon Kim, either, who has made horror films that gleefully refuse to conform to the generic norms, and with The Good, The Bad and The Weird the most comedic & playful Western of recent times, with some killer chase sequences to boot.

The Man from Nowhere - the second film from director Jeong-boom Lee - does not, however, fuck with the rules for the most part. This is a straight up "man on a mission" film, with frequent lashings of grimness, criminal mobs and ultraviolence. It's sort of like Taken, but not as profoundly stupid. Our setup is as follows: MYSTERIOUS (emphasis on that), quiet pawn-shop owner Tae-Sik (played by Bin-Won) has become reluctant guardian to young So-Mi (Sae-Ron Kim), whose mother is usually either strung out on heroin or entirely absent. When So-Mi and her mother are kidnapped after a disastrous drug robbery, Tae-Sik is reluctantly (there's that word again) the only one willing to rescue the little girl, and forced to confront his trouble past in the process.

It sounds familiar, and yeah there's not much in this film that will come as a massive surprise. Indeed, the middle act feels dragged down by familiarity. Without spoiling anything, I will say some of the backstory segments rely on cheap narrative tricks to get their point across. There's some fun action sequences, including a visually impressive one in a nightclub. But it kind of just descends into mindless man against the mob stuff at times, the sort you've seen many a time before. Not to mention that the reasons for our protagonist's MYSTERIOUS SILENCE are a little naff, and eyeballs did roll at times.

Lucky, then, that the two acts that surround it are terrific. The first takes a surprising amount of time to introduce the strange, non-literal father/daughter relationship that drives the film. While So-Mi's background is melodramatic, it's impossible not to feel sorry for her gazing into her wide, emotive eyes, as the camera frequently does. It makes for a compelling motivation, and the film moves forward with urgency. The final half an hour, too, impresses. Again, a number of cheap tricks, but it's the astonishing action sequences that keep you involved. One of them is the most visceral, epically choreographed brawl since the Oldboy produced a hammer. There's a mix of tense shootouts and brutal hand-to-hand combat. If you're going to do cliche, do it like this. The time taken to establish the central relationship most certainly makes our anti-hero's actions more credible and involving.

Admittedly The Man from Nowhere doesn't always play by the rules. One of the sidekicks to the central antagonists is a fascinating character, barely speaking (in English when he does) but torn between a sense of duty and quiet moral pride. It's a bad guy that isn't just a depthless bastard, compared to the other grunts who get in the way during Tae-Sik's kill rampage. Yet the film doesn't surprise all that much, instead happy to tell a well-worn tale with an unusual competence. Filmed in predictably dingy tones for the most part, it probably won't stick in your mind like, say, The Chaser (again, with lashings of genre fuckery). For mindless thrills, though, The Man from Nowhere has energy instead of originality, and it's hard to complain as the film comes to a surprisingly satisfying conclusion.
Posted by thecynicalgamer at 1:13 AM