In which we discuss the strengths of failings of current marketing trends by engaging in sensitive discourse concerning whether they shall be roaring successes or cinematic feces.


Cars, contrary to popular opinion, isn't totally worthless. It's just distressingly formulaic for a Pixar film. Simply occupying a world with speaking cars lacks the imaginative, almost childlike ingenuity of, say, exploring the concept of monsters under a bed or having toys come alive when their owners aren't looking. The second film in the franchise - which, let us not forget, is basically a plump, overly generous cash cow for Disney in terms of merchandising - is taking a different direction. Seemingly replacing the nostalgic heart of the first (one of its few definite strengths) with what appears to be a globe trotting spy film is a curious change of pace. The trailer suggests lush visuals but distressingly broad "Japan so crazy!" humour. I silently pray it will be good, and I have only once been somewhat let down by Pixar, but dare I suggest this has the potential to be SHIT? I'm looking forward to Toy Story Hawaiian Vacation more.


Personally, I didn't quite know what to make of Miike's last grand genre experiment Sukiyaki Western Django. The hyperstylisation was impressive and overall good fun, but the bizarre mesh of Western and Eastern culture didn't quite gel as smoothly as it could have, especially the choice of having non-English speakers speaking English. This looks like it has more potential, though. Although distinctly in territory mastered by previous directors - Kurosawa notably - Miike's extreme violence and general playfulness will hopefully carve something unique out of a well trodden traditional Japanese samurai setting. Trailer suggests it'll be more grounded visually than usual, but perhaps that will be to the film's benefit. The vast amount of cutting swords, though, suggests the Miike we all know and sometimes love. HIT.


Mere weeks away from release, I have no idea what the fuck to think about this one. On one hand, the mix of stylised sci-fi and middle America settings is certainly interesting. The presence of Portman is a little reassuring. The character design seems top notch. And, of course, the traditionally Shakesperian Branagh as director is still a fascinating oddity. Yet the trailer also contains some forced 'hip' humour, the suggestion of a fairly unoriginal story, possible CGI overload and some bizarrely broad comedy. I also fear it may come across as camp as fuck. Arghh! Can't make up my mind! (S)HIT?


This checks almost every entry the by now oh-so-predictable checklist of the annual Woody Allen film. Super talented cast? McAdams, Sheen, Bates, Coutillard, Wilson - check. Romanticised portrayal of a European city? The clue's in the title - check. Pretentious, forced, unrealistic dialogue? A shit tonne in the trailer alone. So I doubt we're in for many surprises. I'm sure it will be pleasant, somewhat endearing, look stunning, and be kept afloat during the increasingly trite and overblown screwball romantic plot by the consistently strong performances. And the poster's nice, really nice. Look: I love Allen, I really do. But like so much of his recent work, why is Midnight in Paris likely to be so SHIT? 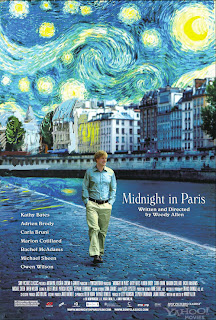 Posted by thecynicalgamer at 11:25 PM