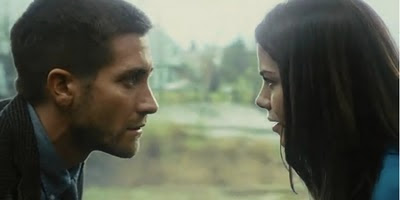 Duncan Jones is making sci-fi fun again. He made a wonderful first impression with Moon: a high-concept but playful film that had a lot of trust for the audience. Initially confounding, it slowly explained the fictional science naturally and entertainingly. The presence of Sam Rockwell helped, naturally, as did everyone's favourite demented AI since HAL himself: the delightful GERTY. It was fun, original and impressively grounded for a film set in a zero gravity environment.

For the first half of Source Code, Jones crafts a worthy and entertaining follow up. Jake Gyllenhaal plays Captain Colter Stevens, who wakes up after a helicopter crash on a commuter train speeding towards Chicago. But his body isn't his anymore, it's that of a teacher. Sitting across from him is Christina played by Michelle Monaghan (who, might I add, is not the worst person in the world to wake up across from). She seems to know him well, but he's never seen her before. After Stevens bumbles around in a daze for eight minutes - discovering his reflection is not his own in the process - the train blows up, and suddenly Stevens wakes up trapped in a pod somewhere. His only contact to the outside world is through a television screen with a Colonel played by Vera Farmiga and a group of scientists on the other end. After failing to explain the situation to him in any depth, Stevens is merely informed he's on a mission to find the bomber before the train blows up (importantly, it's not traditional time travel we're dealing with here). He's then whisked back to the train seat eight minutes before the explosion.

It's a confusing plot to explain, but to Jones' and writer Ben Ripley's credit the information concerning what in the name of fuck is going on is fed to us at a welcome and engaging pace. It's not as confident as Moon in that regard - one exposition scene that explains what exactly source code is feels forced. But for the most part it's energetically paced. We make sense of the situation alongside Jake, the internal urgency and confusion of the plot very engaging. It's Groundhog Day in action film form, and it's fun seeing Stevens desperately trying to make sense of the bizarre mission while also trying to track down a terrorist amongst a group of your average morning commuters. It's silly, but good silly.

The cast are impressively involved too. Michelle Monaghan is the strongest of the lot. While by design we can't learn a hell of a lot about her character or background with the guy whose body has been taken over by a military captain, she still gives a very warm and likable performance - which is vital as Stevens himself begins to try and save her from a fiery death. Like her characters in Kiss Kiss Bang Bang and MI:III she's a love interest with depth, again proving herself as a worthy actress able to make something out of potentially thankless roles. Gyllenhaal has great chemistry with her, and outside that gives a frantic and energetic performance - a potential action star with at least some sort of talent. Vera Farmiga gives a great performance too as this film's GERTY - her initial role as mere ambiguous adviser becomes something more as her humanity quickly becomes evident. The weirdest performance of the lot is Jeffrey Wright as lead scientist Dr. Rutledge who camps it up something fierce. It's a strange one that always doesn't work, but again shows that perhaps Jones is willing to promote a sense of silliness and playfulness, and that is far from a bad thing.

Speaking of bad things: now we get onto the second half, or more accurately the third act. In contrast to most, I liked the weird and brief antagonist reveal, even if is a bit anti-climactic. It's the fact that the film loses considerable steam after the mysteries are all solved and the big reveals revealed. It's ironic, considering this isn't a steam train we're dealing with (an awful joke, I know, forgive me). The main problem is that the film feels like it ends seventeen times or so. There are a good few moments when there's a perfect spot to cut or fade to black, but the film inevitably continues on a bit longer. It's a shame, considering much the resolutions are cheesy and superfluous. There's a technically impressive shot that would have acted as a logical but unforgivably overwrought conclusion, but it chugs along for another five to ten minutes until an even more overwrought ending. When it finally cuts to black, it feels surprisingly sudden for a film that had slowed to a halt almost a quarter of an hour previously.

It's distressing that the audience leaves Source Code on a bum note, as otherwise it is an effective and entertaining action flick. It's also a sci-fi film that neither condescends or overplays the central high-concept. It's hardly Primer in terms of sci-fi intelligence, but not everything has to be. Duncan Jones has again proven himself as an entertainer of considerable worth. But removed from the low budget of his debut, Source Code towards the end begins to veer dangerously towards Hollywood formula and 'accessibility' in an attempt to reach a wider audience. It's disappointing, because up to then it had been impressively accessible science fiction while retaining a subtle intelligence. Still, he's a director with a lot of promise, but let's hope that Hollywood doesn't have its wicked way with him.
Posted by thecynicalgamer at 9:44 PM