A Few of My Favourite Scenes #1: Paprika

Satoshi Kon's death last year was one of cinema's contemporary tragedies. After suffering a brief battle with cancer, Kon died in August 2010, leaving his last film The Dream Machine unfinished (production is being completed by Madhouse). The career of one of anime's most exciting, distinctive voices had been cut unfairly short. Yet even Kon's limited filmography is stronger than most directors manage in double, triple or quadruple Kon's time in the directors chair. From his disturbing debut Perfect Blue to the touching, nostalgic Millennium Actress and Tokyo Godfathers, in eight short years he created a fantastic catalogue of work, including the complex but brilliant TV series Paranoia Agent. When Paprika was released in 2006, it was yet another artistic triumph from an exciting newcomer to the scene. Few could have predicted it would also be a swansong.
The film opens with a lengthy, disorientating prologue showing a detective stumbling through a surreal dream. When the detective finally wakes up, it's revealed that he was undergoing a type of psychotherapy to combat recurring dreams. Conducting the treatment is a fiery red head: our titular heroine. This extended prologue then transitions smoothly into opening credits. And some opening credits they are.

Credits are for many an inconvenience: a distraction before the movie proper begins. Many resort to the Woody Allen school of thought: a black screen, white text and jaunty music completely separate from the main film. However, for many they're a tool to create a dynamic, exciting opening to grab the audience's attention. David Fincher is particularly talented in this field. Paprika puts Kon in the same ballpark as Fincher: rarely have names popping up on screen been so hypnotic.

Of course, in this case, it's not the words themselves that hypnotise, but the wonderful montage that plays over them. The audience is presented with a cavalcade of inventive, playful imagery. We see Paprika traveling through space and cyberspace - a dream-being able to utilize everything from a t-shirt to a cartoon rocket as transport. She puts a jacket over a dozing office worker, invisibly skips past a night guard and escapes two flirtatious men (the looks of a disgust in the split mirror is a particularly delightful touch). It's joyous visual storytelling, the kind only animation can achieve. Kon was endlessly imaginative; telling stories that took full use of his chosen medium, and this scene is a perfect example of his profound talent at illustration. And this isn't just an irrelevant flight of fancy either - the final cut to the black-haired Atsuko introduces us to the split-personality concept that is vital to the core narrative. Paprika is a dream, Atsuko is reality. It's a tricky concept as the film goes on, but one introduced with beautiful simplicity.

I've yet to mention the most distinctive element of the scene. That would be Nigeru Mono by Hirasawa Susumu, the music driving this magnificent sequence. It has energy to match the rambunctious editing and animation, and provides the credits with an extremely unique pace. The soundtrack is easily one of the highlights of the film throughout, and Nigeru Mono is the catchiest themes that emerges from it. It's been my ringtone and morning alarm pretty much ever since I saw the film the best part of half a decade ago. 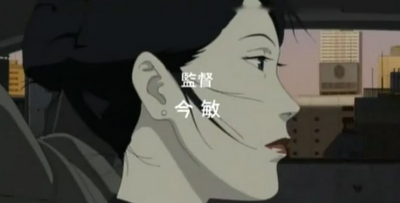 The film that follows the opening credits provides many other joys - the Parade sequences particularly almost overflow with imagination. The plot may occasionally steer towards the convoluted - it's one of those films when sometimes it's better just to go with it even if you don't entirely get the finer narrative details - but it's always engaging. Yet everytime I watch the film it's the credits that stand out and put a big ol' smile on my face.

Satoshi Kon didn't know Paprika would be the last film he'd put his name too. But when his writer/director credits pop up at the end of the scene, it's an appropriately imaginative on-screen tribute to one of animation and cinema's most under-appreciated artists.
Posted by thecynicalgamer at 9:44 PM