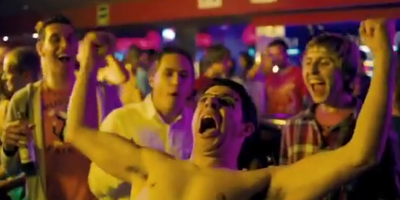 The Inbetweeners is the rarest of British sitcoms: one that's genuinely funny. Like the 'early, funny' work of Ricky Gervais, it built its humour around cringe - it was simply suburban teens Will (Simon Bird), Simon (Joe Thomas), Jay (James Buckley) and Neil (Blake Harrison) struggling through their final years of school. Embarrassment predictably followed. Archetypes though the characters may be, the show was most notable for being a genuinely honest look at the life of teenage boys. The situations may have been contrived for maximum comic effect, but anyone who has been through the school system could totally relate. First cars, discos, exams and, of course, 'clunge' (probably the most uttered word in the entire series) - these are but a few of the topics hilariously addressed by the writers of the show over three brief but consistent seasons. It was the honesty and the characters that allowed the Inbetweeners to enjoy deserved popularity - who, after all, hasn't had a cocksure, obscene acquaintance just like Jay?

The jump to a feature form was not one that immediately jumped out as a good idea. When it was revealed that the lads would indeed be on tour in Malia, like so many British sitcom characters before them, fears only escalated. But then again the holiday resort is a much more natural setting for these four fellows - the pre-university holiday is a rites-of-passage for many a young adult these days. So after an accelerated fan-service laden first act - featuring cameos from the teachers and parents who were the butt of many a joke over eighteen episodes - the guys graduate from secondary school and are off on holiday. They arrive, discover their accommodation to be sub-pig-sty, and promptly proceed to get fucked up. Is any further synopsis required?

Well, yes, as it turns out, but we'll get to that later. Let's focus on the first half... em... first. These scenes are almost beyond sensible film criticism - they do exactly what they set out to do. If you liked the Inbetweeners, you'll more than likely enjoy the film. It is certainly funny. Jay makes a drunken ass of himself when he finally realises he has to act upon his brazen, boastful lies. Simon mopes and mourns his recent break-up with Carli (Emily Head: the only minor character from the TV show to return for an extended role) who is awkwardly holidaying at the same resort. Neil proves himself as the lovable fool with little to no standards, as he happily enjoys getting acquainted with the post-menopausal ladies of the island. And Will is his usual brutally honest, nerdy self. They get involved in genuinely amusing situations - whether it be one of cinema's great comedy dance scenes, epic hangovers or mistaking a bidet for a children's toilet with predictably brown results. And then there's the scene where they visit a busy resort swimming pool - that one's best to discover for yourselves, and destined to be acknowledged as one of The Inbetweeners finest moments of situational comedy.

So yeah, The Inbetweeners Movie is funny, and that's a relief. But around the half way mark it begins to have something the show was usually casual about - plot. The narrative of the show was usually just an excuse to lead up to a crescendo of embarrassment. Here, they actually begin to focus on things like relationships and growing up. Yeah, they probably had to do this to justify a ninety minute running time (all things considered, it's hard to deny we're dealing with a cash cow rather than a film made for the art). But it feels quite non-Inbetweeners-ey. The plot heavily focuses on four girls they bump into into a seedy, empty nightclub. It's clear rather quickly that each of the girls is an almost perfect match for each of the lads. Of course, there's plenty of awkwardness between them and romantic success.

In fairness, many of these four subplots are rife with amusing incidences. Simon's ineffectual wooing of Lucy (Tamla Kari) is particularly chuckleworthy, with at least two of the most emotional scenes interrupted by very funny punchlines. On the other hand, Will's infatuation with the pretty, sarcastic but taken Alison (Laura Haddock) is distressingly by the numbers. It's all building to resolutions you fear are going to be formulaic, and at the risk of spoilerizing, they kind of do. Particularly odd is Jay's coming-of-age tale. Through his overweight love interest he begins to see the error of his crude ways - and this, in my opinion, is definitely not the Jay I expected to see. The drama is consistently tricky to buy into when it's merely distracting from the laughs. Some emotional payoffs, perhaps, but movie is strangely sentimental for a film based on an admirably unsentimental TV show.

Perhaps I'm over critical here, because I did laugh quite regularly with the film. It's endearingly crude and rude - one of the few comedies that manages toilet humour with a strange, almost adorable charm. But whereas the laughs were tightly condensed into an efficient twenty-five minutes in the show, here they're more infrequent and stretched over a far less efficient running time. But for most that won't matter. Because The Inbetweeners Movie is first and foremost rather funny, and probably the definitive 'lads on tour' movie. If we can call an end to that cursed genre as a result, that would be a particularly favourable outcome.

Posted by thecynicalgamer at 11:25 PM