A Few of My Favourite Scenes #2: Toy Story 3

The folks over at Pixar must be getting slightly existentialist as they grow older. Over the course of two films - Up and Toy Story 3 - they made two surprisingly profound reflections on mortality and 'growing up'.  There was barely a dry eye in picture houses around the globe during the heartbreaking montage that introduced us to our elderly protagonist Carl and his wife Ellie in Up. Rarely has a film being so emotionally affecting in such a short space of time. One may have assumed enough tears had been jerked. But Pixar in their infinite wisdom decided to kick us while we were down with Toy Story 3.

What differentiates Toy Story 3 from Up is our familiarity with the characters. Two delightful prequels had introduced us to the colourful cast of plastic cowboys, pigs, dinosaurs, potatoes and space rangers. Personally, having seen the first at a very suggestible age of eight, the mere mention of Toy Story elicits a very unique level of nostalgia. And the terrific sequel built upon the themes and ideas of the first to propel it into the rather empty echelons of sequels that either equal or improve upon the successes of the first. One may have thought one brilliant sequel was enough. But after a decade long gap, another TS sequel was unleashed. Such a move would usually stink of a cynical moneymaking maneuver. In the hands of Pixar, however, this second sequel emerged as a uniquely worthwhile endeavour, and inadvertently created one of cinema's finest trilogies in the process. Because, in an all-too-rare move, Toy Story 3 acknowledges something peculiarly mature for a modern day Disney film: that time has moved on.

The toys in Toy Story haven't aged. They can't. But their owner Andy has. And so has the audience. Like myself, the people who watched Toy Story as kids have grown up. The cast & crew who made the first film are no spring chickens either - in a casual but affecting touch, TS3 briefly acknowledges the absent Bo-Peep and Weezy the Penguin, whose voice actors had passed away in the lengthy gap between films. Odds are Slinky Dog (actor Jim Varney died a year after Toy Story 2 was released) would have been excluded had his springy nature not have been such a convenient tool to get the characters out of the various jams they find themselves in. The core narrative of Toy Story 3 acknowledges Andy growing up and going to college, and his long-ignored toys struggling to find meaning in a newly dusty life. Parallels between Andy and the viewers aren't subtle: they're the very foundation of the film, relying on the accurate assumption that many viewers here will have boxes of ignored toys of their own. Indeed, I've often said anyone under college-going age is unlikely to be quite so moved by TS3. The coming-of-age themes are resonant and moving, but Toy Story 3 goes one step further that that in its most remarkable, memorable scene.

After an energetic, imaginative and very funny extended rescue sequence and unintended escape in a dumpster, the toys find themselves in an incinerator due to the fiendish non-interference of the bitter Lots-O'-Huggin Bear. The tone now takes a sudden turn from the exciting to the emotional. As the garbage drifts towards the incinerator, Jessie turns to Buzz and asks him what to do. He simply stares at her sadly. No words are uttered. The toys simply look at each other, hold hands and close their eyes as they await the inevitable together. 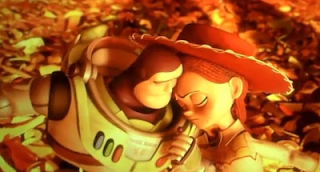 Threat is a concept largely absent in the often predictable world of family entertainment. But here the danger is terrifyingly real. After three films of lucky escapes, it appears as if the characters are finally in a hopeless situation. And they simply accept it. Reinforcing the unbreakable friendships that are pretty much the heart of the Toy Story films, if they're going to go down, the only thing they can do is go down together. And so a group of plastic playthings bravely face their inevitable death. The helpless audience holds their breath and thinks "holy shit". And yes, shit has most certainly gotten real. For a film about anthromorphic toys, only the most cynical of viewers could feel cold as these animated characters face a fiery end.

As a scene, it's a beautifully animated one. The orange tint makes the heat of the furnace feel very uncomfortable indeed. The furnace itself is a monster: an avalanche of metal flowing towards a destructive epicenter. But what makes the sequence so remarkable is the sound, or lack thereof. The dialogue free minute that marks the film's climax is one of cinema's most affecting emotional moments. Pixar trust the audience to understand the thoughts of these characters, and so their silence says more than a hundred sentimental utterances ever could. All we hear is the flowing metal and an urgent, pounding soundtrack that is a thousand miles away from the jaunty, upbeat Randy Newman numbers that have come to define Toy Story over the years. Like the 'Strange Things' montage of Toy Story, the heartwrenching 'Jessie gets abandoned' montage of the sequel, or of course Up's beautiful opening, the incinerator sequence once again proves that Pixar are masters of using only music and visuals to tell a story.

Ultimately, the situation is resolved the only way it can be: a deus ex machina of sorts that still fits neatly into the Toy Story fiction. It's definitely a cheap resolution to a hopeless situation, but fuck me did I let out a sigh of relief first time I saw it. Not content with such an emotional climax, the film goes on to jerk even more tears in the extremely moving sequences that follow, although finally provides a deserved happy ending for our heroes. But it's the furnace that truly lingers in the mind after the playful credits roll.

The observant viewer will surely have noticed the frequent appearances of a plush Totoro teddy throughout the film. Indeed, his appearance is a clue to the thematic focus of Toy Story 3. In My Neighbour Totoro, the mother of the children who imagine the cuddly creature of the title is hospitalized with an unspecified illness. Like Toy Story, Totoro a film that captures the joys of childhood imagination, but also acknowledges that reality and mortality can cruelly intrude. And rarely has this theme been so wonderfully realized as in the incinerator sequence of Toy Story 3.
Posted by thecynicalgamer at 3:18 PM