A Bit of the Old Ultraviolence 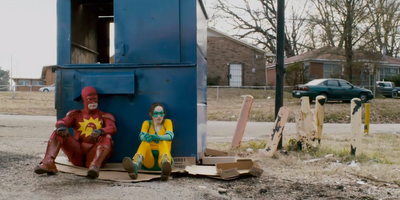 It's always a shame to see a film doomed to obscurity before it's even released. In James Gunn's Super's case, it was Kick-Ass that denied it a chance to receive the attention it deserved. A simple synopsis and basic genre comparisons to Matthew Vaughn's stylistically interesting but ultimately vapid superhero parody do little to distance the two films. A whole section of the film's wikipedia page is devoted to the 'controversial' similarities to Kick-Ass. Despite some high-profile names - Kevin Bacon, Liv Tyler, Ellen Page and Slither alumni Nathan Fillion - on-board, Super's confrontational themes and low budget meant it was destined for, at best, cult appreciation. It was released to critical apathy (even the positive reviews are cautious rather than gushing) and, in Europe anyway, direct-to-DVD hell.

All of this is a damn shame, because Super is a fascinating if flawed oddity. The whole 'Joe Bloggs becomes superhero' comedy has indeed become a sub-genre unto itself in many ways. But of the recent attempts, Super emerges as a very distinctive experience. Unhappy Frank (Rainn Wilson) is married to Sarah (Liv Tyler), a recovering drug addict - the marriage, as he informs us in voiceover, is one of only two perfect moments in his humdrum life. However, she inevitably relapses, and one day she's gone. Frank discovers that she has become involved with drug-dealer Jacques (Kevin Bacon). The police are uninterested, and Frank is subject to a beating at the hands of Jacques' goons when he tries to get his wife back. After watching a religious superhero show one evening, Frank experiences a bizarre vision involving God and, ahem, tentacle rape. Inspired, he decides to become a masked vigilante called The Crimson Viper. To Frank's displeasure the slightly demented Libby (Ellen Page) insists on tagging along as sidekick Boltie. Wrench in hand, they set out to dish out hard justice and save Sarah.

Sounds pretty standard, right? Wrong. Where Super impresses is in it's surreal, controversial delivery. You see, we're never really sure if Frank is a nice guy trying to save his wife or a nice guy who's mentally disturbed. The frequent hellish visions he experiences (amusingly visualised by Gunn and crew) hardly help make the case that he's a sane individual. When apprehending criminals, he seems unable to differentiate between petty and serious crime. In one sure-to-be-infamous scene he graphically wrenches a cinema-goer for skipping the line. He means well, but is unable to moderate his particular brand of vigilante justice. It, more than any other film to date, asks us to examine the motives and methods of superheroes. It's a film that dares the audience to support this anti-hero's actions. Not even the best Batman comics critique the nature of comic book justice with the bite of Super.

Super is a very funny film, albeit one where the humour is pitch-black (another trait that will never endear it to a wide audience). A particularly effective comedic creation here is Libby, with Ellen Page presenting a pleasant subversion of her usual hyperactive style. Like Hit Girl in Kick Ass, Boltie here is a parody of the fetishised hero. An amusing sequence shows Libby showing off her tight, squeaky costume to a deeply uncomfortable Frank, and a later sequence best not to ruin here illustrates this sexualisation in a manner that's both hilarious and extremely disturbing. Yet for all the laughs, Super is a film that insists on making the audience question why they were laughing in the first place. For every act of slapstick violence, there's a more graphic one where your laughs will become more and more nervous. It culminates in an act of graphic violence that you most certainly will not laugh at. Super is a rare beast: a comedy that knows the fine line between shock humour and genuine shock, and walk said line masterfully. Where Kick Ass merely toed the controversial waters, Gunn is unafraid to dive right in, much like his under-appreciated Slither. He also directs with an impressively playful eye - whether it be the aforementioned 'visions' or the occasional animated interlude.

A few significant flaws hold Super back from true greatness. The pacing is all over the place, and some subplots are utterly redundant. One involving a policeman ultimately has little to no relevance to the overall plot: there are no consequences or payoffs for once promising plot threads. While the performances are largely solid - Bacon and Page camp it up effectively - Wilson is sometimes less than charismatic as our protagonist. He's good - particularly in the scenes where he has to awkwardly contend with an over-eager sidekick - but not amazing. Luckily there's some great minor roles from the likes of Nathan Fillion and Andre Royo.

The biggest flaw of all comes in the final moments, when Super settles on a rather sentimental conclusion. It's tonally at odds with all that has come before. It doesn't entirely taint the experience, but is a sour note to end on. But for the most part Super is bold, confrontational cinema. To take something as inherently silly as a superhero comedy and create something with as much bite as this is an achievement. It's a parody that cleverly satirises it's chosen genre, and a film that is comfortable with making the audience think about their preconceptions while providing them with deep belly laughs. Such comedic success is all too rare, and perhaps the reason why Super was always destined to be shunned by a mainstream audience. For those willing to take the risk, however, there are rewards a plenty. To go with an appropriately sexualised analogy: it has the balls to follow through with the ideas it presents, rather than just lamely thrusting in the general direction of satire.
Posted by thecynicalgamer at 7:54 PM