The Passion of Ingmar 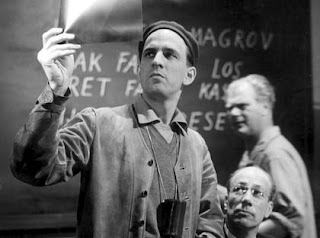 Five Films by... is an irregular look at five defining features by a certain director.

If some dude with a firearm approached me and said he'd shoot me unless I told him who my favourite film director was, I'd do two things. First, I'd pinch myself and silently question the validity of the ludicrous situation I somehow found myself in. Secondly, I'd say "Ingmar Bergman".

The popular perception of Ingmar Bergman as a grim old bastard isn't entirely inaccurate  - indeed, a number of his best films are extremely depressing affairs. Yet there is a sort of uplifting optimism running beneath the surface (or, occasionally, on the surface) of his films. He's a director who sticks a giant spotlight on humanity, delving deeper into all parts of the human condition than any director who came before or after. He was an experimental film-maker even in his early films, and had a super talented cast and crew backing him up throughout his career. Picking five films out of his massive filmography is tricky, but the following five are ones that will give you a good solid start. Also, I've posted these films in chronological order, but I'd also recommend checking them out in that order as there is an overall career arc to Bergman's work which is well worth exploring.

The Seventh Seal (1957): The best known and iconic of Bergman's work, and with good cause. The image of Max von Sydow on a beach playing chess with death remains one of cinema's most remarkable sequences. The rest of the film enters typically depressing territory on occasion - it is set during the Black Death after all. Yet what is most memorable about the Seventh Seal is the complex, rewarding ending - which combines a depressing dance with death (literally) with an optimistic look at the inherent goodness of people. With the gorgeous Bibi Andersson and her on-screen husband Nils Poppe a representation of said optimism, there's something quietly triumphant about The Seventh Seal despite its pitch black tone.

Through a Glass Darkly (1961): If this list was longer, I'd include all three of Bergman's 'chamber plays' or informal 'Silence of God' trilogy. The three work together extraordinarily, but the first is a true revelation even on its own terms. With a cast of only four, it tells the story of the mental breakdown of Harriett Andersson's Karin (Bergman's mother's name and a frequent character name in his films) as her husband, father and brother look on. It's powerful stuff with four extraordinary performances. All the talk of spider gods, incest and other dark things make this one of Bergman's grimmest but most intense films, with a deep religious question at the centre. Minimalist but a thing of great beauty, even if the notoriously self-critical Bergman strongly rejected it in later years.

Persona (1966): Hence we come to my all time favourite film, an astonishing film that is unlike any others. The remarkable culmination of Bergman's career up to this point, he throws every thematic and psychological concern of his into the mix over eighty five hypnotic minutes. Barring minor exceptions, it's a two woman show - Bergman regular Bibi Andersson and newcomer (soon to be regular) Liv Ullman both baring their souls. Sven Nykvist's cinematography is typically stunning with a true mastery of framing and lighting. It's a film that can be dissected in great detail, but it's better just to watch it. From the opening surreal montage of themes, ideas and characters from Bergman's earlier works to the intense conclusion, it is very much a masterpiece by a cinematic genius. The description of Andersson's beach encounter stuns me everytime. Spectacular stuff.

Fanny & Alexander (1982): There are a number of Bergman films not listed here I'd potentially rank higher than F&A, but few of them sum up the man behind the camera so well. An extremely personal film, it probes Bergman's childhood memories in vivid detail. As with everything Bergmanesque, there's no shortage of shocking or disturbing moments, but what separates Fanny & Alexander is a warm sense of nostalgia that is a true once-off in Bergman's filmography. With stunning imagery, a brilliant ensemble cast and an extended running time, Fanny & Alexander is an oddity, but a special and deeply involved one.

Saraband (2003): I'm cheating a little here. It's unfair to skip (very effective but perhaps overlong when taken in anything but mini-series format) predecessor Scenes from a Marriage if you want to get the most out of it. But Bergman's last film is a triumph, even on a stand alone basis. Calling back two regulars Liv Ullman and Erland Josephson, it's a moving portrait of old age, marriage, death, nostalgia, regret and ultimately a celebration of life itself. Once again, there are troubling psychological probings - a subplot with incestuous undertones is par for the course - but this is one of the most astonishing full stops to a director's career. Bergman's last film as director before his death in 2007, this is every bit as effective as all that came before it, drawing on all his experience and preoccupations for one final and deeply moving swansong.

Avoid: The Serpent's Egg. Like many directors before and after, Bergman's one experiment in the Hollywood studio system was a high budget disaster. Distressingly grim, but with far less rewards than usual from the great man.