No More! Notes on downloading 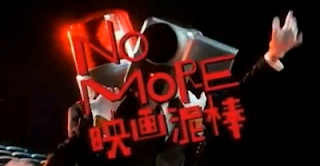 I'm a bit behind the times. I like to think I'm fairly on top of this whole technology thing, but increasingly it seems my morals are holding me back. You see, I'm one of those quaint weirdos who still pays for their films. There are a few reasons for this. Most importantly, in my eyes, is the appeal of the cinema screen. If I can see a film in a theatre, I will: simple as that. I don't buy the argument that some films don't need to be seen in cinemas, or indeed even with a healthy home entertainment setup it's basically the same thing as seeing it in a picture house (even if I do love the clarity of Blu-Ray). When Black Swan came out, people were telling me how I had to see it, and how they'd watched it on their laptop. Quite frankly, this was sacrilege in my view, and I waited until the delayed Irish cinema release to watch it, and was happy to have waited when I finally experienced the thing in 35mm glory. But this doesn't fully explain my paying for film. Indeed, I have occasionally paid to stream films on services such as Mubi, so I'm not against downloading. Hell, going to the cinema is always restricted by what's on, and hence we have to resort to home viewing for the vast majority of cinema. I want to be a film-maker, and I want to support independent cinema. Hollywood I couldn't care less about (although I still happily pay to watch the best mainstream cinema, and irregularly the worst), but I will do what I can to encourage foreign and independent cinema distribution. Finally, I - selfishly - enjoy having a good DVD collection. I like having my favourites on hand to watch when I want. Obviously downloads would allow that too without the cost or non-virtual space requirements, but I still find a quiet excitement in having a healthy collection.

Despite - in my bias eyes - having some sort of logical and moral groundings for not downloading, I'm frequently made to regret my stance. This isn't just by the downloaders criticising my dated outlook on film consumption. It's by the very people I'm giving money to.

This is an article about why it is becoming increasingly frustrating to be a paying supporter of cinema. As a bit of background, I'm from Ireland, which is part of the problem.  What follows are a number of reasons why my loyalty is continually being challenged.

1. America does it better: Netflix is an amazing resource. As is Hulu. We Europeans have nothing of the sort. We have 4oD - Channel 4's extremely forward thinking and successful streaming service - but that's very much an exception with a selection limited to what TV Channel 4 shows. Sky Player is there for subscribers, including an Xbox 360 version. We also get the RTE Player - Ireland's national broadcasters streaming site - on the PS3. Everything else is crippled by rights issues. The selection available on the Irish versions of Mubi and iTunes pales in comparison to international equivalents. While we have mail order DVD services, we have nothing like the cross media functionality of Netflix, or anything with the selection of NF either.  Everything is limited by rights issues, and doesn't show any sign of resolving itself. There are ways to resolve these things with a bit of tech-saviness, but these possibilities are beyond most average viewers, who'll just resort to the far easier illegal downloads.  How are we supposed to pay or watch something legally when the option isn't available to us, yet it is elsewhere? It's endlessly frustrating.


2. Making the customer feel like an idiot: Anti-piracy ads. Oh dear. Perhaps the greatest single incentive to pirate. Take a look at some examples:


When one buys or rents a DVD, they're forced to sit through this crap, often unskippable. Scare mongering of the most absurd kind (brilliantly satirised in an episode of the I.T. Crowd). Downloaded copies have no such issues with annoying anti-piracy warnings. They're embarrassing, simply put. Studios clearly don't get it. These exaggerated, ludicrous arguments against downloading are painful viewing, clearly trying to be 'cool' and 'with it' but making the poor consumer feel like a fucking idiot in the process. Stop. Please stop. Or at least follow the Japanese example and be awesome while you're at it:


3. Cost: If legal downloading is ever going to be viable, it has to be well priced. Subscription based services are clearly the way forward. Even minor amounts of advertising is a small price to pay for access to quality, legal streaming services (like 4oD, which gets the balance dead right). There is probably still a place for individual purchases, but iTunes doesn't help that suggestion. 13.99 Euro to buy a digital copy is hella expensive when I go onto Amazon and get the DVD or even Blu-Ray cheaper. We're not fools: we know that when physical copies are removed from the equation costs go way down and fewer parties need to receive payment. This needs to be reflected in the cost of buying a film online if it is to remain viable. Similarly, rentals should be cheaper than they're physical copy equivalents. iTunes has the odd good thing on sale, but the crippling digital rights issues and restrictions mean it is the least appealing way of buying a film.

4. Selection: If I want to watch a film, I should be able to get my hands on it. But distributors are increasingly unwilling to take risks, even online where the cost and risk factor is lower. There have been many independent films I have had to import because they've been unavailable in my region in any form. At the moment, I can't afford to pay the high import costs on films I want to see. Similarly, when it's almost impossible for me to get a film how am I meant to pay for it? I want to watch Lukas Moodysson's Fucking Amal or Show Me Love, but the only way to legally do it at the moment is to pay for a costly boxset of his films that contains a number of films I already own and don't want another copy of. Again, I just want the one film, but can't get it a reasonable price. Any surprise that many turn to downloading in such situations? And they need to get on sorting out territorial release date variations - why should one country have to wait months or sometimes years to get a film that has been out somewhere else for ages?

I love cinema, and am happy to support it. Yet the profound ignorance of studios, distributors and other parties is a frustration. Don't get me wrong, there are still tonnes of people doing great work in getting us great films - Artificial Eye particularly have really started knocking it out of the park with their theatrical and DVD releases in what is surely a difficult niche market. There are plenty of independents out there doing a great job. But others aren't doing enough. As long as rights issues, high costs and profound ignorance are damaging effective film distribution, people are going to understandably resort to the easiest, most preferable option even if it isn't legal.

Cinema is an art. It's a shame that sometimes that art is out of reach of the people who genuinely want to support it.
Posted by thecynicalgamer at 5:46 PM