Whispers, moving castles and cliffs by the sea. 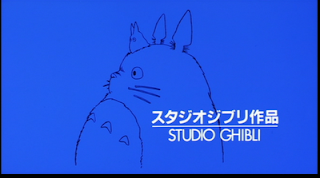 Hello there, how are you? I'm great, thanks for asking! And welcome back to Film Ha Ha's Ghibli retrospective. Part one is over here, in case you're interested. Last time we covered everything from the early days of the studio up until 1994's Pom Poko. Yet one could say much of the best was yet to come. While the studio had enjoyed moderate success overseas with their early films - well, specifically My Neighbour Totoro - the Ghibli Revolution hadn't yet fully spread outside of Japan. But two Miyasaki films were soon to give the studio the attention it deserved abroad. They also found a welcome ally in Pixar's - very much the Western equivalent of Ghibli in quality and commercial terms anyway - John Lasseter, who would ultimately be responsible for bringing quality Ghibli localisations to the West (personal note: the Ghibli dubs tend to be of a high standard, but as with all foreign cinema for the love of all that is good stick with the subs if you can). The second half of the Studio Ghibli filmography is every bit as rich as the first.

Whisper of The Heart (1995, Yoshifumi Kondo): A warm, honest adolescent love story that is one of Ghibli's most adorable and oft-forgotten gems. The film was directed by Kondo who had acted as art director on Kiki's and Only Yesterday. Unfortunately, he died in 1998, possibly influenced by work-influenced stress. Prior to his death, he was expected to be the next 'big' Ghibli director. Going by the evidence here, you can see why. With a script by Miyazaki, it's a joyful film with fun fantastical interludes gelling nicely with the grounded main narrative. A simple but extremely engaging film about growing up. You'll have Country Road stuck in your head for weeks.

Princess Mononoke (1997, Hayao Miyazaki): The film that brought Ghibli to the West big time. The most grown-up of their filmography - there are a number of genuinely brutal bursts of violence - it's also distinctly the work of auteur Miyazaki. In many ways, it feels like a revisit of the themes established in Naussicca, specifically environmental issues, ideas of man vs. nature and spirituality. It has some of Ghibli's most haunting imagery and dynamic set pieces. Not much more to say: it's a truly glorious piece of work, ending in one of the most extraordinarily epic conclusions in cinema.

My Neighbour the Yamadas (1999, Isao Takahata): Well, you certainly can't accuse Ghibli of being predictable. Takahata's follow up the outlandish Pom Poko is another oddity in the catalogue - a surreal, light-hearted family comedy. Most notable is the distinctive, deceptively simple art style. It looks amazing, the whole thing based on a series of Japanese comic books. The narrative takes the form of a number of loosely connected vignettes, feeling more like a series of short films about a colourful Japanese family. It's a fascinating look at Japanese family life, and a thoroughly good time to boot.

Spirited Away (2001, Hayao Miyazaki): As important as Mononoke and Totoro were abroad, it was the adventures of Chihiro / Sen that made us foreigners cop the hell on and pay attention to Studio Ghibli. And with good cause - Spirited Away is a transcendent masterpiece. It's a breathtakingly vivid examination of Japanese culture and folklore, a surreal odyssey containing some of animation and cinema's most inspired imagery. Backed up by a gorgeous score from long-time Ghibli collaborator Joe Hisashi (with apologies for not mentioning him before - his soundtracks are an integral element of many Ghibli films) it's close to flawless. The train sequence remains - in my eyes - amongst the most beautiful sequence in cinema history, and the film proves Ghibli are in a whole different ballpark to other animators.

The Cat Returns (2002, Hiroyuki Morita): From one of my favourite Ghibli films to what is potentially my least favourite (oh, wait, we have Tales From Earthsea left to go). Anyway, the Cat Returns is a semi-sequel to Whisper of the Heart, but a very very loose one at that, mostly just down to the recurring feline character The Baron. The films follows the human schoolgirl Haru as she explores the land of cats after getting involved in a bizarre marriage arrangement with one of the royal cats. I don't know: there's just something very strange about this whole film, and it's hard to get what it's trying to do. Perhaps it doesn't try to do anything particular, but it just feels like a pretty throwaway entry in the Ghibli catalogue. I must revisit it at some point and re-evaluate, but can't say I'm all that enthusiastic about it.

Howl's Moving Castle (2004, Hayao Miyazaki): Miyazaki returned to Europe after his distinctly Japanese Spirited Away. For me, the results weren't as compelling as his previous two films, although I haven't seen this since its initial cinema release. Still a fine piece of work though, full of Miyazaki's trademark industrial wonders, magic and childlike innocence. The adaptation of a Diana Wynne Jones novel, it was the pacing and narrative of Howl's Moving Castle that made it seem a bit unwieldy to me. Perhaps I just don't find the English setting as compelling as the breathtaking bath house of Spirited Away. Still, the animation is gorgeous, and another one I will surely re-evaluate and I predict I'll be a bit more favourable this time around.

Tales from Earthsea (2006, Goro Miyazaki): Oh dear. Goro is the son of Hayao, and the two suffered a falling out over this film when elder Miyazaki didn't believe Goro was ready to helm a feature yet (the two later reconciled). Going by the evidence, Hayao was right. This is the only Ghibli film I'd consider a complete failure: a dull, generic fantasy that has none of the character of their best films. The animation is predictably top-rate, but they have nothing interesting to illustrate. The only Ghibli film I'd say this about, but: avoid.


Ponyo on the Cliff by the Sea (2008, Hayao Miyazaki): The most recent film to get a release in the West, this was in my book a thoroughly successful return to form. Miyazaki returns to the childhood innocence that has defined many of his best films. It particularly recalls Totoro - the friendship of Sosuke and newly human fish girl Ponyo recalling the central relationships in the earlier film. It's a bizarre film on occasion - the whole underwater warlock / apocalypse plot is a bit messy - but it's also a unique and colourful film. The second half goes a direction I personally wasn't expecting, and the whole thing radiates a sense of fun and playfulness that had been missing from Ghibli films for a while. It also has a wonderful theme tune, savaged by a horrific Westernised cover for the English language release. Lucky, I still have my Japanese subtitled copy ;).

The short films and Ghibli Museum: You're best having a look on wikipedia or IMDB for a run-down of the Ghibli shorts. A lot of them are hard to come by. One of the most well known is Miyazaki's enjoyable music video for On Your Mark by Change & Aska about a group of angels. Of particular interest to me anyway are the shorts that play in Tokyo's (or more specifically the suburb Mitaka) Ghibli Museum on a rotating basis, the film changing every month or so. Distressingly you can't see these films anywhere else. I've had the pleasure to experience two out of the nine currently on rotation: the fun Whale Hunt (which features many of the ideas and themes Miyazaki would explore in greater depth in Ponyo) and the absolutely adorable Mr. Dough and the Princess Egg, the anthropomorphised egg of the title one of the studio's most obnoxiously cute creations! As for the museum itself, it's a joy for any fans: a glorious celebration of animation in all its forms in a beautiful building. It's like Disneyland without the roller coasters or sugar rush. Plus there's a giant Catbus for the kids to play in. They don't let adults on it. I've tried.

The future: The latest Ghibli film was released in Japan last summer: an adaptation of the classic Borrowers stories entitled The Borrower Arrietty. Goro Miyazaki is currently working on an adaptation of a manga series entitled Kokurikozaka Kara, due for release this summer in Nippon. Finally, Isao Takahata is working on an adaptation of an old Japanese story entitled The Tale of the Bamboo Cutter. Expect that to be particularly prettily animated. As for old Hayao? Well, like he does after most of his recent films, he's announced his retirement. But given that he has been unable to live up to the promise before, I'd imagine we'll see him back, or at least we can hope so! He's scripted Goro's next film, so let's hope it isn't the failure Earthsea was!

Phew. Well there you have it. Not the most in-depth look you'll find, and we kind of skimmed the shorts (sorry!) but this has been one writer's opinions on the finest animation studio currently working today. From adolescent love stories to surreal flights of fancy, Studio Ghibli have one of the most inventive and interesting filmographies of any studio currently working in cinema. They're still going strong: the guiding lights of traditional animation in a CGI populated world (although they have been known to cheat with a CGI background or two). But there's no-one else quite like Studio Ghibli, and I personally doubt there ever will be.

Posted by thecynicalgamer at 10:58 PM