or: Why the Coens' least distinctive, most conservative film is one of their best. 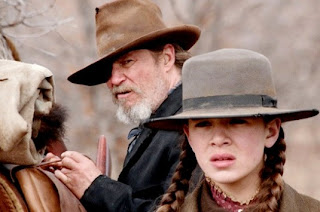 Before I start commenting on True Grit, I should point out I'm a longtime Coen fan. I've seen the entirety of their filmography, from Blood Simple to a Serious Man. There's barely one I don't love, barring the disappointing duo of Intolerable Cruelty and the Ladykillers. And even they aren't awful films in the Big Momma's House sense, and they stand up relatively well compared to most of the junk Hollywood craps out. They're just not up to the expectations we have of Joel and Ethan.

Let's focus on expectations, actually. Because if you go into True Grit expecting a typically smarmy, ironic Coen Brothers film, disappointment may ensue. It's a shame, but a new film by any director is always going to be judged by their previous standards. It's most troublesome when a director wants to diversify or do something different. I loved The Wrestler, for example, but also thought it lacked the distinctive visualisation of Aronofsky's earlier work. Still a wonderful film, but felt less like a Darren Aronofsky film than I may have expected.

What does one expect from a Coen Brothers film? An American setting no doubt - off the top of my head, I can't think of a single scene in a Coen Brothers scene set outside America barring the Mexico excursion in No Country for Old Men. I'm sure I'm wrong on that, but there's no denying they're distinctively American film-makers. Similarly, it isn't wrong to expect a certain layer of postmodern playfulness, genre distortion, black comedy and irony. They're 'smart-assed' film-makers, a trait that has won them legions of fans and legions of critics. Me, I'm a fan, even having laughed my head of at the notoriously polarising Burn After Reading. I felt it was the closest they had come to matching the timeless brilliance of the funniest comedy ever made (sweeping hyperbole alert!!!) The Big Lebowski.

True Grit is different. It tones back all the distinctive Coen Brothers quirks to make something that is, well, a Western. An old-fashioned Western, with cowboys and the odd Native American for good measure. No Country For Old Men was a Western too, but a contemporary one, with plenty of unexpected twists to the formula. It's most certainly brilliant. But True Grit is back to basics. For the Coen Brother's second adaptation and second remake, they've perhaps made their most traditional film since Miller's Crossing.

I've never seen the original True Grit, and that may have influenced my positive opinion of the remake. But the 2010 film is one of the most breathtakingly successful pieces of cinema I've had the pleasure to experience in a while. It's a beautifully put together film - Burwell's score is frankly straight-up beautiful, Deakin's cinematography lush and hypnotic. The writing - potentially largely down to the book - fast-paced and engaging. The acting is tremendous - Hailee Steinfeld achieving something far more confident than would be typical of the usual 'child actor', Jeff Bridges a gloriously mumbling drunk and Matt Damon giving a sad, lonely performance. The other actors do fine in relatively minor roles. Some have argued that Bridges overacts - but he's portraying a larger than life character, and the sometimes incomprehensible performance perfectly suiting the sometimes incomprehensible character.

Pulling all these disparate elements together are the Coens, not entirely responsible for all the individual elements but importantly pulling it all together. It's much different than their usual films, which are more distinctively theirs. Approaching the Western genre directly, though, has provided a far more surprising end product than if they were their usual irony laced selves.

Most notably, True Grit packs an emotional punch. Emotion is usually absent in the buffoons and caricatures populating America as seen by the Joel and Ethan Coen. Yet by the end of True Grit, I was genuinely moved, disappointed to leave the world and characters behind. This is surprising - back with Burn After Reading, only two years or so ago, we were invited to laugh as a main character was graphically shot in the head. Here, any threat to the protagonists feels real and moving, especially an emotionally intense final horse ride. How surprising!

I'm sure the Coen Brothers could have made a postmodern Western - you could argue they already have. And the duo resorting to straight up genre after deliriously subverting it in years past is an odd decision. But it works, simply because True Grit is such a spectacularly strong film. There are a few flaws - the handful of deus ex machinas providing some cheap resolutions, the 'epilogue' a little shoehorned in. Yet the flaws are few, the quality of the overall package winning out. It isn't all that different from Western's past (going by the trailer for the Wayne original, not all that different from True Grits past, either), and rather less liberal with the rules than some of the genre's finest examples, such as the glorious work of Sergio Leone. Yet in utilising what has been shown to work before, the 2010 True Grit works, and works rather well in this viewer's opinion.

A Serious Man was also a bit of a change for the Coen Brothers, although the surreal elements, unusual thematic focus and black comedy were par for the course in their filmography. Burn After Reading may have been a bit of a shock compared to the less dark comedies that usually clog multiplexes, but was a comfortable fit with the comedic stylings of the brothers Coen. It's in the sweeping vistas and traditional shootouts of True Grit that the lack of originality seems more refreshing, somehow. The Coen's have repeatedly proven themselves masters of the ironic, and for at least one film they've now created a rousing Western, fitting into a densely populated genre comfortably. It's not their most distinctive, and many will argue far from their best. And despite that I feel it's the most worthy addition to their filmography in quite some time.
Posted by thecynicalgamer at 8:21 PM